As is well known, this is a day in the life of a few characters. It is a testament to the writing that those characters and what they get up to is so peripheral it hardly matters. The writing literally ranges from the sublime to the ridiculous. I’d agree with those that argue that there is more of the latter than the former, but I have read enough to know that when I don’t get it, it’s usually my fault, not the author. Usually.

So, I did what most dedicated readers do when then they look for scholarly insight into the works they are perusing: I turned to Wikipedia. Thankfully, the entry for Ulysses is excellent with not only a detailed history of the novel and its influence but also descriptions of each and every episode. Once I’d read these, I had a much greater understanding of what Joyce was doing in the novel. For example, I’d found the language of Episode 14 (Oxen of the Sun) very strange. It turned out that Joyce had written it to display the styles of English writing across the ages. The episode begins with in early English and ends in modern day slang seamlessly weaving all the styles in between as it does so. Bewilderingly masterful.

And so I came to understand that those parts (and there were many) which I regarded as ridiculous rather than sublime were in fact, well, at least pretty close to sublime. This is definitely one of those books where a commentary can be very helpful although that would probably double the time you need to dedicate to it.

Speaking of time, I thought that this would be a great read from Audible, and I was not wrong. Jim Norton’s unabridged recording for Naxos Audio (with Marcella Riordan reading Molly Bloom) has to be one of the greatest audiobooks made. Norton perfectly reproduces the prose for each section. Although this meant a huge range of volume at times (e.g., going from subdued stream of consciousness to bellowing) and this was hard to manage in the car, it definitely helped to understand what was going on and who was speaking. Even better, his careful interpretation meant that I had more of an idea of Joyce’s original intention.

So, why did this not make Arukiyomi’s Hall of Fame? Well, for that, it would have to do more with plot and characterisation. This is not a page turner. This is not a novel where the action rapidly pivots about critical events unless you consider buying a pork kidney to be critical. And whilst the stream-of-consciousness method does give insight into Leopold and Molly Bloom in ways that other writing does not, we are only used to our own stream of consciousness, not interpreting those of others. Consequently, it’s quite hard to gain substance of a character from this alone.

This is a novel that anyone serious about novels has to read and appreciate the importance of. We can disagree on whether we like it or not but I don’t think I could respect the opinion of anyone who dismisses this as rubbish. It’s quite the opposite. 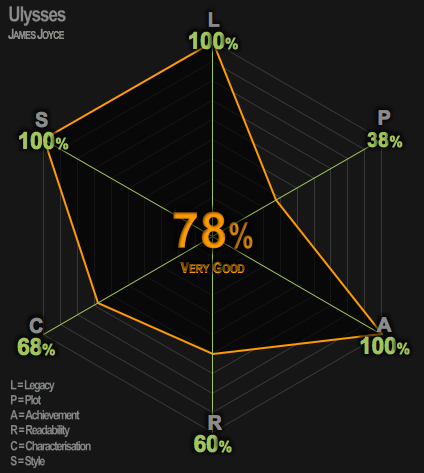 Context: Started reading this in The Idiot restaurant in St. Petersburg. REVIEW This is my third Dostoevsky and I’m really beginning to develop a taste for this guy and starting…

Context: Listened to the librivox.org recording of this while I washed up over many nights. REVIEW Another rollicking adventure from the pen of RLS. I’ll be kind of glad not…

Book in Context: This book kept me company one long weekend on the Seoul subway. REVIEW What a powerfully moving book. After a year of my life in India, this…

Not the most memorable novel I’ll ever read. Apart from pneumatic trousers (a chindogu candidate if ever there was one), little remains a couple of months on as I write this…