This book is like attempting a full day’s work which, after about ten minutes, you kind of get in the rhythm of. You know you’ve got some way to go before you complete everything you have to do but, you feel pretty optimistic. An hour in, you take a break, putting your fatigue down to the fact that you didn’t quite have enough caffeine that morning. In the struggle through to lunch, you begin to dread the afternoon’s grind. Lunch is like a lying on a sun-drenched beach watching a storm approach from the horizon. The afternoon is best not described and, just before you think you’ve finished, the boss drops an extra stack of files on your desk which sentence you to three hours’ overtime. As you open the files, you realise that the work you’re now chained to is exactly the same work that you thought you’d completed before lunchtime.

Now for its essential qualities. If I’m right, Gaddis was trying to to get across the idea that people and their products aren’t always what they seem. The fact that he needed nearly a thousand pages to get that idea across seems to me to be either a lack of skill or some purposeful form of sadism on the part of the writer. Perhaps it’s the very embodiment of what the novel is attempting to convey. Whatever it is, anyone beyond childhood is already aware that we’re fakes and that life is, for the most part, an elaborate cover up. Tell us something we don’t know Gaddis.

The characters are essentially hard to grasp. They kind of slipped through my fingers as I attempted to make sense of who they were, what they were called, why they were created and what they were supposed to be doing there. There’s no plot to speak of, at least none that can be expanded by contained by more than a brief paragraph (or two if you cheat), and the structure is fragmented and literally repetitive.

All this creates, in essence, a piece of writing that is almost impossible to describe and, more importantly, hardly worth the effort you’ll expend anyway. It’s quintessentially post-modern in that the artist isn’t going to tell you what it means and, having spent time with it, you realise that life’s too short to discover what it means for yourself. Move along people. There may be something to see here, but it will take you more time than it’s worth to figure out what you’re looking at. I’m not sure if this is the guy who is responsible for Pynchon, but if it is, we owe him nothing. 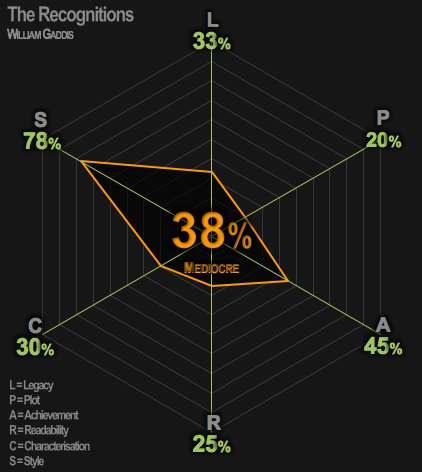 Many years ago, Underworld scarred me for life. Then I read White Noise. Had it not been recommended by a great friend, I would never have returned to DeLillo. I was…

Context: Finished this off in the middle of a 1 mile run. Target: 3 miles in half an hour. REVIEW Haven’t read any short stories for a long time so…