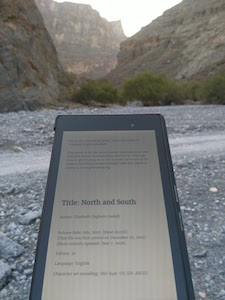 Context: Finished this off while on a wonderful camping trip in Oman.

Such was the impression this book left on me that I completely forgot I’d read it. I made no note of it in the list of completed books I keep, ready for review, and only recalled it when someone mentioned it recently.

Gaskell is not one of my favourite authors although she does have the right to some credit. I’m glad to have closed my attempt at her output with this novel as I shall not be going back.

What does Gaskell contribute that future generations should be grateful for? Well, she does give us a good profile of the social issues facing her generation. The rise of industrialisation had created misery for millions. Gaskell portrays this honestly, if not skilfully. Although that’s about it as far as I’m concerned, I’d say that’s enough. Her work was as important for her own need to remain true to her beliefs as it was for her generation to hear. And the relentless tide of technology has not made her observations any less valid. Here though, I feel disappointed.

I’m disappointed because Gaskell quite obviously can’t write tremendously well. Had she only produced “the trivial wittering rubbish of Cranford“, she would have been forgotten long ago. Her saving grace was that she used her literature as a medium for the message of social justice. I just wish she’d done it better.

North and South suffers from the stain on subsequent literature left by Austen.

Quite why Gaskell felt fettered to Austen is a mystery to me. This distraction only serves as a spoonful of sugar to help the medicine go down. Distressed at the thought of the handsome mill owner being responsible for the murder of many through the conditions he imposes? Have no fear, the next chapter will cast him as a love-smitten sop and make you feel all warm and gooey.

Unfortunately, the cure for the complaint of social injustice lies in a full understanding of just how disgusting the medicine really is. While Margaret is able to exert some influence on Thornton, and he eventually comes round to the idea that his workers’ lives actually matter, there’s no desperate struggle with his conscience once he sees the light. His struggle with his feelings for Margaret gets far more air time.

Now, it’s no secret that I feel Austen is vastly overrated and that her influence has not been entirely helpful. This is a good example of why. Had Gaskell stood on her own two feet and told it like it is based on her own experiences of injustice, North and South would have been far more important and had a far greater impact. It’s a pity that she wasn’t able to. 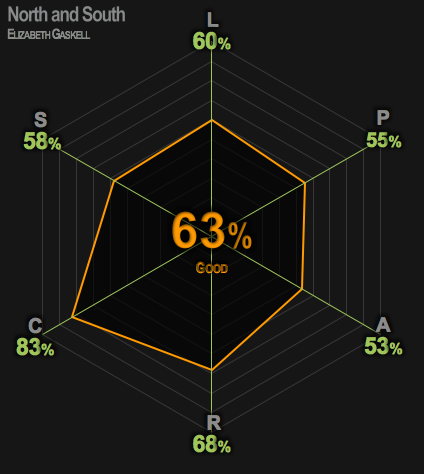