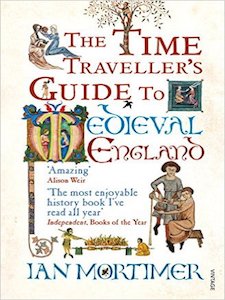 Context: read this over a year and a half in bed with the wife in Bahrain

I kind of like history and so, when I started to dip into this in a bookshop, I thought it would be right up my street. In the end, I was glad to get to the end of it. Mortimer can write, but there’s a little too much detail in this to actually keep my attention right the way through.

This basically starts off like a Rough Guide to Medieval England. This in itself is a great idea. I think if Mortimer had stuck to this, he might have written a better book. Instead, it starts very quickly to morph into a pretty standard description of various aspects of Medieval English life.

This has its own interest of course. There’s a ton about Medieval England which is fascinating. There’s also a lot which is, obviously, going to be mundane and Mortimer doesn’t really know what to leave in and what to leave out. As comprehensive as it is, there are

times when your attention is going to wonder and you’ll start counting pages to see how much further you’ve got to go until you get to something that you find interesting. There are only so many descriptions of doublets I care to read, for example, but you can talk about the Black Death all day as far as I’m concerned.

My wife and I read this to each other before going to sleep over the period of a year and a half. The text is 300 pages of densely printed script. Had we perhaps read it the normal way, maybe it wouldn’t have dragged at times. On the other hand, if I do have to read about doublets, bite sized portions are preferable!

If you’re into history, this will interest you and is worth a read. Just don’t expect it to be interesting on every page.