Absolutely pointless and not worth anyone’s time, this is a novel by a man entirely self-absorbed. It says nothing about any particular era, has no characters more three dimensional than a sheet of paper and has no plot to speak of. It wanders aimlessly across the planet sometime around the beginning of the 20th century and contains nothing memorable short of some rather gruesome and vacuous sex scenes.

He doesn’t even include a single chapter to give his poor readers a break as they struggle against the interminable tide of prose for over 1,000 pages. 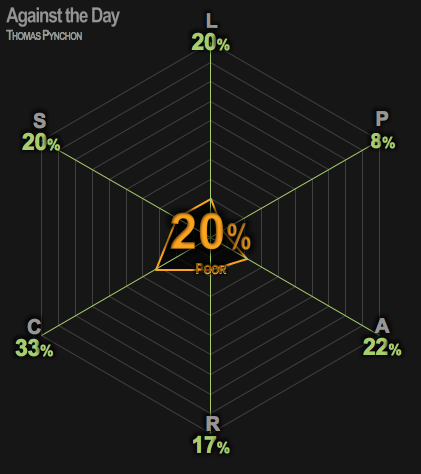 Key: Legacy | Plot / toPic | Characterisation / faCts | Readability | Achievement | Style
Read more about how I come up with my ratings.

Context: Was reading this when we took a final walk up the hills around Ukarumpa before leaving PNG. REVIEW This completed my reading of the canon of Charlotte Brontë’s completed …

No, no, no, no…. NO! This is absolutely NOT the kind of novel we should be seeing on the 1001 list. Absolutely not. This is not a novel anyone needs…