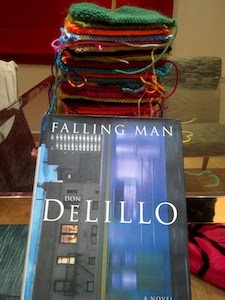 Context: The wife finished off a stack of squares for a baby blanket while I was reading this.

Many years ago, Underworld scarred me for life. Then I read White Noise. Had it not been recommended by a great friend, I would never have returned to DeLillo. I was very surprised to find an excellent novel. Falling Man settles between the two somewhere towards the Underworld end of the spectrum.

Thankfully, it’s about the same length as White Noise. Had it been as long as Underworld, it would have been very, very tedious. DeLillo loves to play around with structure. Whereas in Underworld he did that to the detriment of the entire novel, here it kind of works because he’s chosen a subject which lends itself to fragmented structure: the life of a Keith, a 9/11 survivor.

The novel starts on the apocalyptic streets of New York while he attempts to make sense of his new world. Gradually you piece together his life as you see things from the perspective of his relatives and acquaintances but there’s no point where it all really makes sense. The writing shifts between truncated episodes as he struggles to come to terms with it all. Meanwhile, as a reader, you come to terms with who DeLillo is focussing on and what aspect of Keith’s experience he’s interpreting. It isn’t an easy read because of this shifting focus and I spent quite a lot of the novel telling myself just to hang in there and go with it. I wonder if people who live through tragedies tell themselves the same thing each day.

Because it captures the zeitgeist, it’s got some relevance. Of course, for the victims and their families, nothing else will ever compare. But as a nation, the US did a good job of portraying that this was the most important event that had ever occurred in human history. A mere drop in the bucket of the world population suffered on 9/11, horrific for them though it might have been. Plenty more people died that day from poverty-related issues, or malaria, or drunk drivers, or cancer or a ton of other things that somehow there isn’t that much outcry about on CNN.

Perhaps ironically, the novel displays the same myopia. In this case, it works, although I have my doubts that this was intentional because what I’ve read of DeLillo indicates that, like many of his compatriots, there is only one nation in the universe.

There’s no real resolution of anything, which again seems appropriate given that nothing the US has done since then has in any way reduced the threat, perceived or otherwise, of Islamic terrorism worldwide. And with the disjointed structure, this can make for a frustrating read of a novel that doesn’t quite go far enough to convey the impact of what happened to those concerned.

Previous post: 0566 | Journey to the End of the Night | Louis-Ferdinand Céline