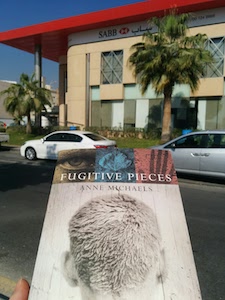 Context: Visited the bank as usual to send money home from Saudi while reading this.

This was a strange book, the tale of a WW2 Jewish refugee who is initially harboured on a Greek island before emigrating to Canada. Michaels writes her own prose, and the style forms a major part of the work. This is deep writing which would benefit not only from a second reading, but probably many more.

The entire first person narrative is overshadowed by the opening scene. Nazi troops break into a family home and Jakob flees. His initial flight is a whirlwind of imagery as this small boy attempts to come to terms with what has happened while at the same time adapt to life on the run in rural Poland.

Once he is given refuge and smuggled to Greece, the story shifts, and we find ourselves in a world illuminated by Greece and all the philosophy and learning it has to offer through Athos, Jakob’s new guardian. Despite the Mediterranean light, the darkness of the book’s beginning constantly haunts the writing and Michaels’ use of metaphor adds to the foreboding.

Once the pair arrive in Toronto and Jakob grows up, the narrative increases its pace albeit with the same burden of loss, grief and sorrow. Jakob goes through a couple of relationships which are inevitably stained with the dye of the opening tragedy. Whereas Wife 1 can’t accept this, Wife 2 seems far more accommodating.

There are two ‘books’ in this novel. The first one I’ve just described, and it was this that worked for me. The second which is a about a third of the book, shifts to the perspective of some other guy researching Jakob, his work and life. I could have taken or left this. It just didn’t have the impact of the first, quite possibly because of the third party viewpoint. That was a shame for me because I think it distracted from an excellent first-person narrative.

Next post: 0566 | Journey to the End of the Night | Louis-Ferdinand Céline