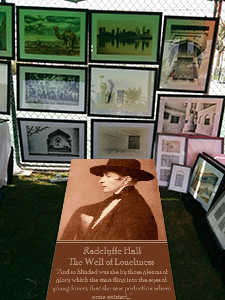 Context: Listened to this while we created a popup gallery of my photography at the Royal Golf Club.

With the expiration in the EU of its copyright, this initially suppressed novel is now, somewhat ironically, in the public domain in Europe. Almost 88 years to the day after it was banned, I finished this off as an audio book. It left me with mixed feelings.

This is a brave attempt to sensitively portray a human side of lesbianism given contemporary attitudes to homosexuality. In its attempt, Hall gets full marks for effort. But, for me at least, I felt it was a bit over the top. I tried hard to discern whether this was a factor of the era that I’m living in or not. I don’t think it was.

Stephen Gordon, so named despite being an unexpected daughter, is raised pretty much like any little boy would be. Now, if I met a woman called Bruce, I’d at least wonder why her parents named her that. But no. Strangely, not a single person in the entire novel seem to find it strange that she, a girl/woman, has a man’s name. “But the author had a man’s name,” I hear you chime. Actually, the author’s first given name was in fact Marguerite.

Anyway. I digress. Small plot issues aside, the novel follows the life of Stephen as she grows into a woman who is male in all but physiognomy. At this point, you’d have thought that the whole nature/nurture thing would come into play a bit. But no, it’s nature all the way. Maybe, from an gay perspective, it’s only ever about nature. I don’t know; when I’m with people who are gay, I spend about as much time discussing their sexuality as I do when I’m with people who are straight.

And along with the emphasis on the natural side of things comes several passages that are very much heartfelt cries for society to accept this state of being. Not only that. There are also many episodes where Hall uses Stephen’s struggle to illustrate a deeply conflicted sense of self. There were even pleas to God Himself for acceptance, none more emphatic than the very last line. While I acknowledge the sentiment, this is where I felt the writing was a bit over the top in its desire to appeal to the reader.

What did I get out of it? Well, as a Christian whose world view is definitely not compatible with the mainstream, I appreciated it first as a stimulus to reconsider my own beliefs and thereby reaffirm them. In addition, I valued it as a historical document of the gay community and one with valuable insights into the issues that they may still face. Thus, it very definitely deserves its place in the history of world literature and its relevance has only grown with time.