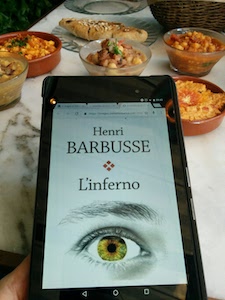 Context: read this as we went for breakfast at a new restaurant nearby. Nice, but pricey and bore zero resemblance to the pics on the menu.

Not a very long novel and not a completely entertaining one either. Barbusse has constructed a hotel room where the unnamed protagonist discovers a hole which allows him to see into the next room undetected. Through this, he manages to view a wide range of events, overhear every single word of every conversation and thereby satisfy his every voyeuristic whim. It’s not entirely edifying.

I read somewhere that the idea is that the hole enables a view of the full range of life. There are illicit lovers, obscure conversations about life, betrayals and even a death. Every conversation is laden with pathos and melodrama. Trouble is, life, especially that in hotel rooms, is usually banal and humdrum. This seems to have been lost on Barbusse.

Putting aside the contrived plot device of a small hole conveying omniprescience, there’s still little here that’s going to engage many modern readers. Nor did I feel that there was anything scintillating that Barbusse had to say about the human condition that wasn’t idealistic somehow. That would come later when WW1 gave him plenty of material to work with.

In the interim, Barbusse was just sharpening his quill as a writer and revolutionary. By all accounts, he would go on to better things.