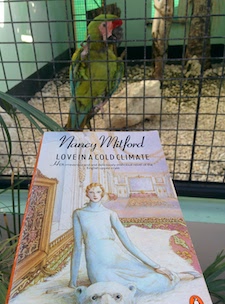 Context: Visited Bird Kingdom while reading this one with some very noisy parrots.

Semi-autobiographical, this is the story of people who have nothing much better to do than worry about their social position in the upper echelons of the British class system. Yawn.

It’s so wonderful that, 100 years on, the British people have far less to do with these plonkers than they were forced to do when this novel was set. Their absolute contempt for anyone who isn’t able to maintain their lifestyle and their self-important system of etiquette is as obvious here as it is in the work of Evelyn Waugh. What is missing though, despite cover blurb to the contrary, is any really decent writing or incisive wit.

Waugh’s books are brilliantly written with characters incisively portrayed as charicatures of the aristocratic class. They are laugh out loud funny in places (Decline and Fall) or draw you in with great storytelling (A Handful of Dust).

Mitford just doesn’t write as well and there’s no real story to speak of. The blurb and the cover gave me the impression that the book would focus on Polly, sublimely beautiful only daughter of the sublimely rich Duke of Wypmington-Cum-Pastry (or something or other). It didn’t though. Instead it focussed on Fanny, the narrator, and her experience growing up amongst the aristocracy and then marrying outside it into Oxford acadaemia. Yawn II.

Polly featured as a childhood friend (if that’s the word as I find it hard to imagine friendship among a society that shares so little emotion) and then ends up marrying someone quite ‘scandalous’. Just when I thought the novel would start to document something actually interesting, Polly vanished to the fringe, and we were left in the dull drawing room of a suburban semi with Fanny forced to entertain her out-of-touch and out-of-place aristocratic acquaintances ad nauseam.

It really wasn’t that engaging, and I’m not really sure what the point was at all. If Mitford was satirising her own social class, it’s so subtle only they will get it. If that truly was her intent, it’s illustrative that she probably didn’t realise this lack of impact. If Mitford is satire of the aristocracy for the aristocracy, then it takes someone like Waugh, an outsider who was invited into that set, to have the objectivity to provide satire for the rest of us.