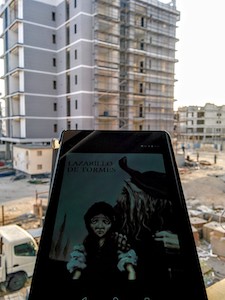 Context: While reading this, they finally took down the scaffolding on the building near our place.

What better way to follow a weighty picaresque novel that was incredibly influential with a very light one that is credited with inventing the genre itself. Someone, and we have no idea who, managed with less than 100 pages, to define a genre that even a genius like Henry Fielding could do no more than emulate with 1,000 exactly 200 years later. Brilliant.

This is a great read as long as you stop at the end of the first of any edition that might have later added portions appended to it. I started reading one of these and gave up after a while. They’re not part of the original and you can tell immediately. Don’t bother.

Stick to the original seven chapters and you’ll follow the life of Lazarillo as he heads out to make his way in the world when forced to leave his home as a child. He finds himself the servant of seven masters who are in turn cruel, corrupt, rife with hypocrisy, miserly and unjust. Through each of these encounters, the author brutally satirises the society of his day with a deft style that I don’t think has a rival in the genre of the picaresque novel. The characters are memorable, as are the events. It makes the lauded English equivalent novel, The Unfortunate Traveller, written nearly 50 years later, look about as coherent as if it was written by William Burroughs with illustrations by Jackson Pollock. It’s a gem.

It’s such a shame that we don’t know who wrote it. But then, in days when writing satire was likely to lead to being burned at the stake, the choice of fame or death must have been a pretty simple one to make. Although death has, to borrow the author’s phrase from opening line, seen him “buried away in the tomb of oblivion”, the legacy lives on. This tiny novel influenced writing for hundreds of years and created a genre that lives even now, half a millenium later.