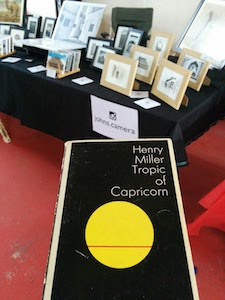 Context: Was reading this when we did our best sales ever for my photography.

Following on from recently finishing Tropic of Cancer, Mrs Arukiyomi picked this one out for me. I thought I was in for the same rollocking ride that Miller took me on through the streets of Paris and was looking forward to more of the same.

Things started out with promise as we encounter Miller (not necessarily the author) at his desk in the Dickensianly dysfunctional Cosmodemonic Telegraph Company. His job is in the HR department which stands less for Human Resources than it does for Hell Released. Before him traipses the last dregs of humanity none of whom, because of quotas, he can turn away and none of whom are in any way hire-worthy. This was thoroughly entertaining.

But as you see Miller languishing in the banality of a wife and kid life, kicking against the goads, you know that it’s only a matter of time until he leaps from domestic frying pan into immoral fire. Such is the case.

It thus begins with the same celebratory tirade for and against the human condition that marks out Cancer as such a groundbreaking work, and I was quite enjoying it until about halfway through where he abandoned form at the same rate that he adopted fornication.

From hereon out to the end, the reader is left to make what sense he can of writing that is, at times, entirely formless and nonsensical and yet continuously punctuated by sex – the incongruous literary lovechild of James Joyce and Leslie Thomas.

Although this definitely disappointed me, I think it’s the only logical way that Miller could have ended this pair of novels. After all, he started out, prior to Cancer by telling a friend, “I start tomorrow on the Paris book: First person, uncensored, formless – fuck everything!” If he didn’t quite achieve that with the first novel, he certainly did with Capricorn, but it’s not an achievement that did much for me.

Next post: 0557 | The Life and Death of Harriett Frean | May Sinclair