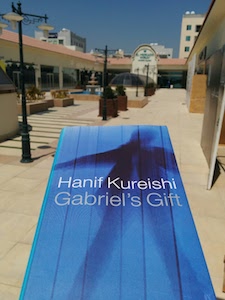 Context: Visited the brand new Mercado mall down the road from us while reading this. Nothing was open!

Oh my… but this was so profoundly awful on every level that I can hardly believe I read it, let alone that for some unfathomable and criminal reason, it was once placed on the 1001 list.

Badly written with flat characters who say and do entirely predictable things, this has a plot that, if Kureishi could actually write, might not be half bad. But he can’t write and the novel thus turns out wholly bad.

Gabriel’s parents separate and his father, a failed musician, attempts to salvage something for his future by reconnecting with Lester Jones, a famous rock musician he once played with in the 1970s. This results in Gabriel receiving a gift of a drawing from Lester. To protect his possession from his money-grubbing relatives, Gabriel duplicates the drawing and passes his own copies off as originals to more than one member of the cast. This ploy soon lands him in a dilemma, and this is where a good writer would have tied the plot in farcical knots. Kureishi’s simple attempt unravels at the first step with no surprises, and in the end everything resolves itself as if he was writing a screenplay for Disney.

The eponymous Gabriel is supposedly 15, but you wouldn’t know it from some of the situations Kureishi puts him in:

At work [his mother] was like a woman he used to know.

This must mean he’s experienced enough to not only know a range of women but to have moved on from a few of them and achieved some kind of history with the opposite sex. More experienced than I was at 15 that’s for sure.

Not only does this 15-year-old understand avant gardism without any context or explanation, he dedicates his life to it:

‘At night even the most conservative of us becomes an avant gardist,’ his mother had said.
Gabriel was very interested in this. ‘I want to be an avant gardist all the time,’ he said.

The banality doesn’t stop there. I could have quoted swathes of the text for badly constructed writing that defines contrivance, but instead, I’ll just give one example of when Gabriel is sketching a pair of his boots alone in his room late one night:

In the centre of the page was a boot-shaped hole. As he turned the page, the boots were sucked back onto it, and everything returned to normal.
Or did it?

I expected the next line to read “duh duuuuuuuhhhhhh” and to hear 1950s gothic horror film music at this point, but everything just carried on as normal.

Actually, yeah, it did. I couldn’t wait for it to end. He writes so badly that at times I thought I was reading the first draft he’d put together when he’d had aspirations of being a writer at primary school. I honestly don’t think anyone would be worse off not having read this.

Previous post: 0553 | An Artist of the Floating World | Kazuo Ishiguro