0553 | An Artist of the Floating World | Kazuo Ishiguro 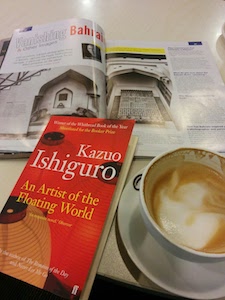 Context: Was reading this when I happened upon a magazine with an article about my photography in Bahrain.

This is a beautifully written novel filled with pathos and written with immaculate prose that describes accurately not only Japan and not only the Japanese character but also the post-WW2 Japanese character. Having lived there for 6 years until 2004 and just come back from a two week trip down memory lane there this summer, it was a perfect time to read it.

While living in Japan, I read voraciously anything I could get hold of regarding not just the Japanese involvement in WW2 but how society dealt with the aftermath. In many cases, it was typically Japanese for most people to deal with it by, well, not dealing with it in any way at all.

Artist places you firmly in the mindset of Masuji Ono an artist who, by the 1950s of the novel, is in his dotage having lost his wife and son in the closing stages of the war. He lives in a house still damaged by the bombing with his memories for company. What he doesn’t live with is any regret for the part he played. If he regrets anything, it’s that post-war society has either indifference at best or downright hostility at worst towards him for the role he regards as heroically patriotic.

Gradually, you piece together his history, but it takes the entire novel to do so. Thus, Ishiguro has taken exquisite care to reveal only the more disturbing sides of Ono once you have already bonded with him. As it should, this gives the novel an unsettling feel and causes you to question your own relationship to him.

Ishiguro here has masterfully taken us into an era where Japan was waking up each morning and, no matter how beautiful a day it was, the nation found itself weighed down with a horrendous legacy it could not shake. Against that backdrop, he reveals the innermost thoughts of a man who is not only unrepentant but even still proud of his involvement. Ishiguro has forced us to decide how to face individuals like him.

We can be thankful that the Masuji Onos of Japan have pretty much all perished. But there are still plenty of others elsewhere who walk the earth with ideologies that have gone out of favour, raising contemporary disgust. Novels like Artist play an important part in revealing the full range of the human condition and how easily it could be for us to be Masuji ourselves.