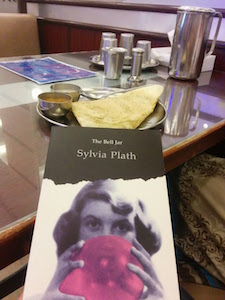 Context: We finally found a decent Indian restaurant in Bahrain while I was reading this: cheap, delicious and totally veggie!

From the very first classic opening line through to the end, this is a page-turner. Plath wrote this very quickly and it shows in the effervescence of the prose. However, there’s no denying that behind the prose is someone who was entirely familiar with words and how they can be handled. Some of the imagery in this is definitely that of the poet rather than the out and out novelist.

Based so heavily on her own life and contemporaries that it caused a scandal for them, Plath writes with honesty about Esther Greenwood’s young experiences as a debutante in New York and, on returning to her provincial home, her subsequent nervous breakdown and hospitalisation.

Throughout the novel, Plath uses Esther as a vehicle to explore her own issues with her role as a woman. This is, in part, why the novel has such a legacy. It clearly reveals issues surrounding society’s treatment of women as accessories for the male-dominated world that we (still) live in.

Unable to find a role that she feels allowed to fulfil in New York, she returns to her native Boston and then gradually slumps into an aimless depression as her well-meaning mother tries to induce her to fulfil any number of roles she feels society will approve of. The depression leads to the breakdown which hospitalises her. Even there, she’s still at the mercy of others suggesting roles she can fulfil once she’s well again. The recovery is as gradual as the decline, and the novel ends as she returns to ‘normal’ life.

As with most novels that deal with psychological disorders, Plath also challenges how sane “normality” is. I assume this is inevitable when the novels are written by those who go through such experiences themselves, particularly if those who don’t also make the same challenge (e.g. One Flew Over the Cuckoo’s Nest).

While here’s a lightness in the novel, even while Esther attempts suicide and is committed to a hospital for the insane, this is dampened considerably by the knowledge that within one month of its publication, Plath would be dead by her own hand. Such sadness.

Next post: 0553 | An Artist of the Floating World | Kazuo Ishiguro

Previous post: 0551 | Billiards at Half Past Nine | Heinrich Böll