0551 | Billiards at Half Past Nine | Heinrich Böll 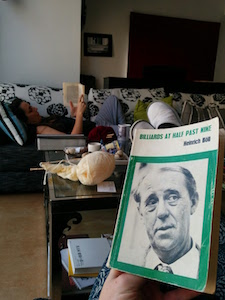 Context: Read this as the first novel in a novel-per-day series of six as we celebrated what we called R-Eid in Bahrain.

This was an interesting novel to pick up a few days after finishing Cat and Mouse by Günter Grass. There are a lot of parallels in the prose of Grass and Böll. Both feature narrators who are less than reliable, there is a complex chronology in both, and both cover the period of WW2 and/or its aftermath from a Germanic perspective.

But Böll’s work is definitely the more complex in terms of its storytelling if not its imagery. Set over three generations of architects and told from the perspective of over 10 narrators, it’s the kind of novel that you have to just relax into and go with the ebb and flow backwards and forwards between the First World War and 1958.

It wasn’t the kind of book that you come away with having learned something desperately new. I found it quite complex, and, like Cat and Mouse, I wasn’t entirely sure I’d got the point of what Böll was trying to say. There are some obvious bits about regret and skeletons in the family closet, but those are pretty obviously going to be part of any German novel that looks at the world wars it began.

There are characters who I’d like to have seen fleshed out even more and their interaction made more of: Nettlinger, who attempts to confront Faehmel early on in the book, for example. And I wonder if it’s a sign of the times that it was written in, when the scars of war were still suppurating in the German psyche, that the rise of Nazism and its adherents is not stated except in metaphorical terms.

Instead, we’re told of those who have “tasted of the Buffalo Sacrament” and those “of the lamb.” This duality sets the majority, the power holders and the oppressors against those who become their victims. While it’s obvious that the former stand for the Nazis, by not stating this explicitly, Böll is able to construct a novel whose characters could be any society in any era of history. In doing so, I think he is making a statement about how human society works, rather than just saying that the problems that gave rise to the Nazis were confined to one period in history. I think this is very wise.

The novel is therefore important, both as a product of its time but also, more significantly, because Böll is able to transcend this and write something that humanity should hear for centuries to come.