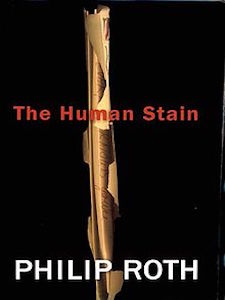 Context: listened to this while dealing with horrendous summer holiday traffic on the bridge between Saudi and Bahrain.

This is Philip Roth in his element, cruising along drawing on contemporary themes in public and political USAnian life and distilling them through the lens of a single individual who, in this case, is Coleman Silk.

Coleman is a university lecturer who falls foul of Theme #1: political correctness after a chance remark with the word spooks (primary meaning: ghosts) is misrepresented as a racial slur. He is forced to resign but maintains his innocence throughout and the bitterness that motivates his determination.

In the meantime, he’s started an affair with a cleaning woman so that Roth can pursue Theme #2: prejudice. This is, arguably, the flip side of Theme #1 anyway and so it’s hard to categorise which of these gives rise to a plot twist about halfway through when (spoiler alert!!!) you find out after his death that, with some irony, Silk had concealed the fact that he himself was black.

Yes, he concealed the fact that he was apparently black.

Now, I’d like to hope that Roth was being incredibly ironic in using this as a plot device because it seems to me that if someone is able to pretend not to be black then they aren’t black in the first place. So, let’s attempt to be a bit more open minded about what this means.

Does it mean that they are attempting to conceal not so much the colour of their skin (which arguably is concealed enough anyway for them to get away with it) but a certain culture that comes with being labelled black? If so, what exactly is that? I can honestly say that despite working alongside a great many people from the US and visiting 14 states that I have no clue what that might be. In other words, that this is an issue at all is beyond my ability to grasp.

All I can say is that Roth is opening a window on a US world where potentially the racial terms black and white mean something quite different to my UK/International view. It seems to me that if you do want to make the colour of someone’s skin an issue then you should maintain your focus there, as the South African government so notoriously did with its strictly coded apartheid system. I’m not saying that’s the right way to run society, but I can at least comprehend the basis for your prejudice.

However, if you’re going to argue that the terms black and white are cultural ones, then surely you are lost my friend. A child with white skin raised by a black family in an all-black community would emerge as black as can be under that definition. Likewise a black-skinned child in an all-white community, no?

And what exactly should a university lecturer who might have had darker skinned ancestors do to identify with his black side? Play lots of Motown records? Replace a picture of the president with one of Malcolm X? Get a perm? This is a total non-topic for me, and if you argue that I need to discover some element of humanity for which this all makes sense then I’d rather remain in ignorance and thank the dear Lord for my innocence.

Themes #3 and #4 are Vietnam and Clinton’s impeachment, but Roth is far less successful at bringing these into the novel. The former is tagged on via the vehicle of the violent husband of Silk’s lover. It doesn’t really work as the episodes that relate to him don’t really have anything to do with anything else. This is a shame because these are the bits I actually enjoyed the most. I thought Lester Farley was a great character, easily deserving of a novel on his own.

Clinton’s impeachment just doesn’t belong here. All I could surmise was that Roth wanted the opportunity to talk about blow jobs and needed a way to do it that made him seem somehow relevant. It wasn’t, and there was absolutely no point to it. When a nation thinks that its president being impeached is on the same level as a war that wrought destruction of millions of lives and our eternal battle with prejudice, I think someone’s lost perspective.

Oh and yes, Roth, we know you’re Jewish, but if I wrote 20 or so novels, I wouldn’t have to remind you in every single one that I’m Caucasian, especially if I wasn’t writing about Caucasians.

GQ (yes, that literary bastion) rated this novel as one of the best of the 21st century. Aside from the fact that we’re not even 20% of the way through the current century, my reading alone would indicate that this rating is a tad premature. It’s okay, but that’s about it.