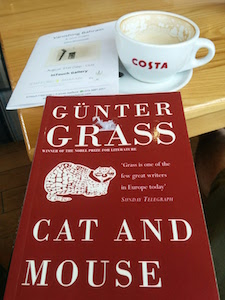 Context: Read this at a local Costa while we waited for the printers to run off catalogues for my upcoming photography exhibition.

I know, I know, I should have read The Tin Drum before this as that’s the first of the trilogy and this is the second book. But, charity store book beggars can’t be choosers.

Pilenz narrates the story of his adolescent relationship with Mahlke, a student who remains aloof throughout the entire narrative.Grass sets up Mahlke as a character who always seems to live outside the confines of society and its rules. Initially, you feel he is happy there. By the end, you’re not so sure.

Clearly, against a backdrop of Nazi occupied Poland, this is a statement, and both Pilenz and Mahlke are types that Grass uses to illustrate the social conflict of the day. It is significant that, in doing this, Mahlke’s life is never told from his own point of view but only that of the conforming Pilenz.

Much of the novel centres around a half sunken Polish minesweeper on a sandbank off the coast of WW2 Gdańsk which Pilenz and his classmates visit on a regular basis. Mahlke first earns his reputation as being a cut above the rest by diving longer than anyone else can to retrieve items from the sunken vessel. While Mahlke is in complete control of his environment there, his last visit leaves you in some doubt.

The Iron Cross features at two key points in the novel that have to do with Mahlke’s refusal to bow to authority he does not respect, first as a student and then again as a tank officer. While there are parallels between both episodes, the latter, which forms the close of the novel, is the more laden with imagery.

The novel is a complex one both in terms of its symbolic aspects and also its narrative. It’s not easy to follow, with the chronology not always in the order you expect. And because you never feel you can quite trust Pilenz as a narrator, you are never sure what to make of Mahlke. The ending leaves you hanging. It’s all very unsettling, and I’m sure that was Grass’s intention.

I’m not entirely sure I grasped all that Grass is doing in this novel, but I definitely came away having been impacted by some of its tremendous force. I’m now on the lookout for The Tin Drum, not least to walk the path Grass took to Cat and Mouse.