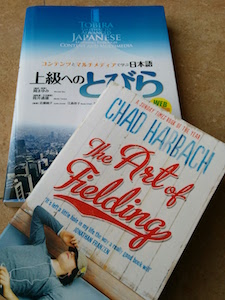 Context: Was reading this while I visited Japan and got back into studying Japanese.

No, no, no, no…. NO! This is absolutely NOT the kind of novel we should be seeing on the 1001 list. Absolutely not. This is not a novel anyone needs to read before they die.

Harbach spent 10 years on this, his first novel. Margaret Mitchell also spent a decade crafting her first. Unlike Gone with the Wind though, The Art of Fielding is not, and never will be, a classic. While their novels have nothing in common, let’s hope that Harbach is inspired by the example Mitchell set of never writing another one again.

The Art of Fielding could have been a good novel. Instead, Harbach needed 3,650+ days to turn a good idea for a psychological novel about a baseball player hitting a run of bad form into a completely sterile and utterly predictable USAnian college drama.

Ooops…  did I spoil it for you?

There’s romance, there’s drama, there’s comedy (well, attempts at it), and there are tears. It’s made for TV from the get go, and North American box-set-bingers will lap it up as they watch every loose end get tied into nice pretty pink bows.

If you’re into airport novels, this is right up your street. It’s an easy read, characters have predictable personalities and do predictable things, and the feel-good factor is laid on thick as everyone walks into the sunset in some kind of literary group hug. That’s what it is.