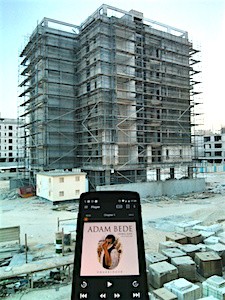 Context: read this while they put up scaffolding for the ongoing construction next door.

The only reason that this got a “good” rating from me and not “okay” was the legacy of the novel in terms of its depiction of country life at the time.

I don’t really get on with Eliot. I find her novels ramble on, and Bede was no exception. One example of this is the title. Why on earth call the novel Adam Bede? Sure, he’s one of the main characters, but he’s not the main character. In fact, his character isn’t even that interesting.

Maybe Eliot wanted to avoid the ire of her contemporary mysogynists by not calling it Dinah Morris or Hetty Sorrel, characters who were far more interesting and whose roles deserved far more of the novel’s focus than Adam’s bland involvement. Eliot’s gender-sakes could well have done with the air time, too.

Then there are various characters whose only role seems to be to hold forth on various topics with sometimes tenuous degrees of connection to the plot or issues of the day. Worst of these is Rachel
Poyser who just won’t shut up. More often than not I felt a sharply delivered blow would be most apt.

The story must have been written on a winter morning. It takes ages to start and, when it finally gets going, it judders along. It concludes with the novelist using a get out of jail free card (almost literally) for one of the characters and the inevitable wedding. Yawn.

So, why is this any good then. Well, it’s an early novel and all the elements that would later make Eliot one of the highest rated novelists of all time are there. That the storyline is flawed and the novel rambles is therefore typical of someone finding their stride. And the fact that a novel that has such strengths can be ascribed to Eliot finding her stride is a measure of the heights she would go on to scale.

This is definitely a novel for anyone who is an Eliot fan. If you’re not, stick to her more accomplished works and give this a miss unless you have a hankering for long conversations in 300-year-old English dialect.