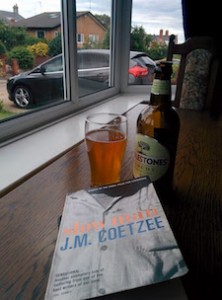 Context: Read this in a lazy day at our house by the sea with some excellent cider my sister bought me for my birthday.

What at first seems like a fairly straightforward novel about a guy dealing with the loss of his leg takes a quite unexpected turn when a character turns up to stay about halfway through.

This character is writer Elizabeth Costello who Coetzee had given a novel of her own two years earlier.  In that novel, Coetzee toys with the reader by using the novel as a vehicle for discussing, well, the novel. It seems he had unfinished business which he returns to in Slow after taking a break to win the Nobel Prize.

Paul has lost his leg having been knocked off his bike by a youth driving a car recklessly or, at least, that’s Paul’s story. There’s the usual stuff you’d expect from someone who’s just lost a leg: regret, anger, shame. To be honest, Coetzee’s such a masterful writer, I would have thought he could have pulled off a novel about an amputee with the kind of searing prose that made Disgrace such a winner. But no…

Alongside his relationship with his missing limb, the relationship with his nurse, a Croatian immigrant, gets increasingly complex throughout the novel. Initially, he values her professional skills. Then, he begins to find solace in getting to know something of her family. Ultimately though, he falls for her. To be honest, Coetzee’s such a masterful writer… etc., etc. But no…

In comes Elizabeth Costello and the novelist starts to talk to Paul. By “the novelist,” I don’t mean Costello, I mean Coetzee. Or, at least, I think I do. Basically, there’s a glitch in the matrix and suddenly Costello is talking to Paul as if he is the creation of her pen and a character in a novel she’s got bored writing and decided to drop into.

From that point on, I really didn’t know what to make of it all and decided to give up and go with the flow. The novel then just petered out with an ending that made me wonder what Coetzee wanted me to take away.