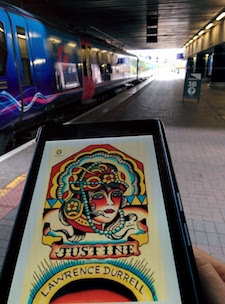 Context: Headed back to the UK and got a train from Manchester Airport while reading this.

Nope. This didn’t quite do it for me. Don’t get me wrong, Durrell can write beautiful prose, and I honestly thought that this would completely entrance me and that the novel would be spellbinding when I started it. But it rambled, and I don’t just mean any semblance of a plot, I mean the characters, the narrator, even the blinking city of Alexandria rambled. It was a haze from start to finish populated with characters who can’t speak except in melodramatic pronouncements of their impending doom in the chasm of their latest love triangle.

The almost dreamlike quality of the prose was one thing I found quite frustrating about the novel. Nothing seems real. The characters can’t seem to utter one phrase of normal life conversation. Take these quotes from the eponymous heroine for example:

Do you not believe that love consists wholly of paradoxes?

When I first met Nessim and knew that I was falling in love with him, I tried to save us both.

Our love has become like some fearful misquotation in a popular saying.

What on earth is all this supposed to mean? No wonder this woman has problems with relationships; she can’t even communicate clearly.

On top of this, every relationship is charged with levels of tension that would be impossible to maintain in reality. And people pop in and out of bed with each other like there’s either no tomorrow or at least no sex tomorrow.

In the end I gave up caring and couldn’t wait for it to end. I didn’t care about Justine or how mesmerising she was supposed to be. I couldn’t care about the narrator or his various lovers. It all just became a bit too vacuous and detached from any semblance of reality. It certainly didn’t give me any desire at all to continue reading the other three books of the tetralogy.

Lawrence was heavily influenced by Henry Miller. I wish he’d had a more concrete influence; at least you know where you are with Miller!