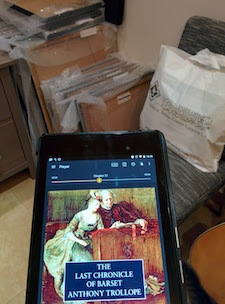 Context: listened to this while I cleaned nearly 30 of 44 frames delivered to me for my photography exhibition with dust specks in!

My first Trollope and what a one to start with! An exquisitely constructed Victorian world inhabited by vivid characters and a strong plot to carry them along with.

Trollope contrives a plot wherein an impoverished vicar (quite presciently based on my own father) is implicated in the scandal of a stolen cheque. Trollope then uses this storyline to illustrate a range of Victorian societal views on issues of morality, religion, crime, gossip, friendship and, in a subplot, marriage and the role of women in determining their own futures. Along the way, we meet such unforgettable characters as the bishop and his insufferable wife and the ever-present vicar Josiah Crawley who we at once find ourselves both sympathising with and wanting to smack in the face.

The result is a very detailed portrayal of 19th century British life which, unlike Dickens, stops short of being at all an exaggerated caricature of the world of the novelist.

This is the last in a series of six books that Trollope wrote about the mythical county of Barsetshire and if any of the other novels are even half as good as this then that’s an awful lot of good reading out there. I’ll focus for the time being on the three other novels he wrote that have appeared on the 1001 list. But if I should in fact finish that before I die, I know where to come for more engrossing reads.