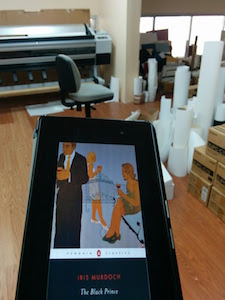 Context: was printing photographs for my first solo photography exhibition while reading this.

What a great read this was. I can also imagine that Murdoch had immense fun writing it too, because that comes across in the writing for too often to be coincidental.

Firstly, it messes with the structure of a novel and blurs the lines between fiction and non by initially presenting it as a kind of screen/play and then having characters comment afterwards on their impression of Bradley Pearson, the protagonist. This makes for an intriguing read as you are aware from the start that, as a novel, it shouldn’t be taken at face value.

Secondly, as with The Sea, the Sea, it’s downright farcical in its descriptions of Bradley’s experiences. The poor man is harried not only by his own thoughts (as any decent Murdoch protagonist should be) but also by a literary rival, his seductive wife, their attractive daughter, his suicidal sister, her estranged husband and (much)

Once it gets going, the series of events simply carries you away with it and you start to wonder where it will all end as events build to a number of crises and Bradley ends up, quite unexpectedly, in a situation where you can’t help but feel for him despite passing desires to throttle him at several points in the story.

So what is Murdoch trying to tell us with this novel? The parallels with Hamlet are well-known and, in a similar vein, Murdoch is asking us to decide whether we feel Bradley is sane or not, the victim or the perpetrator of his destiny, friend or foe to those around him. Murdoch does as good a job as Shakespeare at providing ample evidence for both the defence and prosecution. This would make a great book club discussion.

For those new to Murdoch, I’d recommend starting with The Bell, moving to The Sea, the Sea and then coming to The Black Prince. You won’t be disappointed you did.