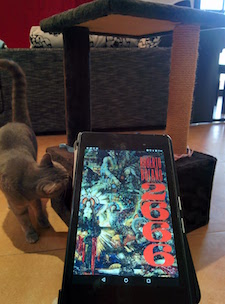 Context: Found a cat tree by the side of the road while reading this. Nanika loves it!

Dear Lord, spare me. Another title from Latin/South America and yet another novel that I could have done without. What the heck is it with that continent that I just can’t abide?

The title either refers to the number of pages you have to wade through to finish this tome or the number of times you have second thoughts about picking this up in the first place. Thankfully, Audible read this to me on my daily commute. If I’d had to actually pick up and get through a physical copy, I don’t think I would have made it. The book is in five lengthy parts which are apparently related although some of the connections are tenuous at best.

Each part starts out reasonably enough but Bolaño is so verbose and the story so rambling that unless you let yourself go with the flow, you’ll be wondering what the heck is going on. Don’t fight it. There’s enough here to keep a reader entertained, but you never get the feeling that you’re in the presence of a literary genius.

The most memorable and controversial part is the one that details the murder of each and every one of 112 women. Almost all of these involve the woman being sexually abused in some way. It’s 200 pages of sheer joy. Now, a writer who wants to give us an idea of how morally debauched society and needs 112 victims to slay in the process seems, to me, to be struggling to get his point across. A skilled writer could do this much more efficiently.

The various supposedly random characters that began the novel are kind of tied together in various relationships to each other by the time you stagger to the end of the fifth section of the novel. By then though, any normal reader simply doesn’t care. It’s only those who have set out from the start with the opinion that this is great writing who think that this is somehow genius. It’s not though. It truly isn’t.

Of course, when I look online, I see tons of praise for 2666. My normal reaction when the world loves a book and I don’t is to conceded that I simply don’t know enough about literature to recognise greatness when it stares me in the face. Even so, with this novel, I have my suspicions that there is a bandwagon here and a lot of people on it.

There is so much truly great literature out there that I honestly don’t think anyone should bother with this book. For those of you pursuing the 1001 Books list, you might as well put this somewhere in the high 900s in the reading order because you could die quite peacefully having never opened its cover.