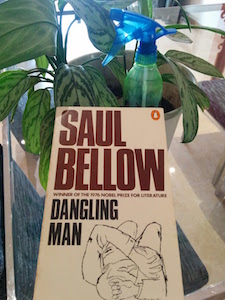 Context: Fought a winning battle with an infestation of black flies in our pot plants while reading this.

Dangling man? Dangling reader more like! Another Bellow under the belt and that’s a good metaphor as yet another protagonist spends most of the novel navel-gazing.

Bellow won the Nobel, so you know that he’s a heavyweight and not to expect too much in the way of plot or typical character development. The Nobel judges seem to look more for an exploration of the human condition and that’s right up Bellow’s street as this slim volume explores what it means to lack purpose in a driven world.

Joseph begins a diary for lack of anything better to do while awaiting orders after being drafted during WW2. We wait impatiently with him for any kind of action and the diary ends just as he is finally called up. I’ve a feeling the sequel would have been a better read!

Joseph spends his days at home or wandering the streets or at friends or getting criticised by his wife, his family or whoever for not getting on with life. He muses on the life he’s left and the life he’s supposed to have embarked on but he never seems desperate enough to actually get off his butt and get down to the draft office and find out why he seems to have fallen through the cracks.

There’s not much to sympathise with here. It’s probably the right book to read when you’ve just graduated with a BA in English Lit. and have spent the last six months trying to find a job where you can actually put it to use!