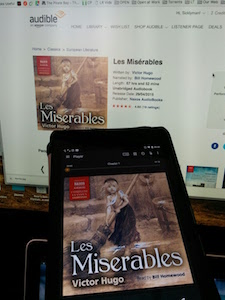 Context: Signed up to Audible to have all 67+ hours of this read to me!

Another bookshelf breaker under the belt. Now, I’m a real Les Mis fan having seen the musical in London four times, but this did not actually meet my expectations in the way I thought it would. I wonder if my experience will be the same as others who are very familiar with the musical and then read the book for the first time.

All the familiar characters were there of course and I really enjoyed the way the book filled in so many details that inevitably had to be left out of the stage production. Fantene having her teeth pulled was a pretty memorable detail which, I am told, is included in the film which I can’t bring myself to watch.

But a couple of things let the book down for me. First a couple of the characters never really get going. Marius was one of them. I just found him really irritating. In the stage production, I find his friends irritating, but he stands out from them. In the book, he’s just flat against the masterful portrayals of Thenardier, Javert and Valjean. On the other hand, the book does provide something the musical does not: the way that Hugo uses Marius as the innocent link between these three.

That this is a masterpiece should be in no doubt. Why then did I not give what is probably one of the world’s best-known stories my top rating of Superb? Well, quite simply because I don’t care for a story punctuated with entire chapters (and long ones at that) of political or autobiographical polemics. I’m in no way against authors using a novel for political or polemical means. In fact, I’d rather they did that than just write a story for the sake of a good read. But the very best novels do this in such a way that you swallow the polemic down along with the story, like a bitter pill in honey. Perhaps Hugo realised his story would expand into a couple of thousand pages and got tired making the extra effort to mould the two together.

The result is a book that appears more as abridged than unabridged. If I found my life’s work being hacked apart by editors to make it appealing to the public, I’d consider the novel needed more work. Dare I say that this does? I might have to take cover after that statement!

I still think it should be read unabridged. It is a product of its time and the times were unjust. It was entirely right that Hugo used Les Mis to raise the issue of his nation’s treatment of the poor, particularly by the “justice” system. His criticism of the so-called revolution is also spot on. It did little to change the fate of the weakest in the system, simply changing the faces of their oppressors. We’d do well to remember this today when history, with the distance it has placed between us and 1789, is often rewritten to depict it as the most glorious event Europe had ever seen.

So, read it, and read it unabridged and be prepared for this river of text to stagnate and eddy in places. Have patience. It will eventually carry you right out along its course. 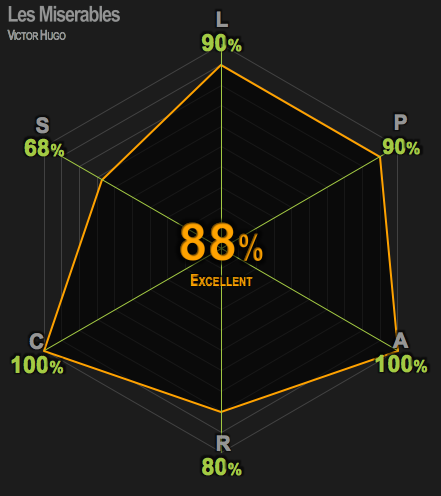 Key: Legacy | Plot / toPic | Characterisation / faCts | Readability | Achievement | StyleRead more about how I come up with my ratings