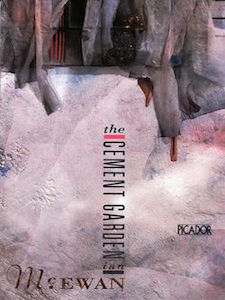 Context: have absolutely no idea what I was doing when I was reading this!

Leaving aside any controversy about whether McEwan borrowed the plot for this novel from another source, for an author’s first effort, this isn’t half bad at all. Macabre, disturbing and laden with symbolism, this is as gripping a read as you’re likely to get out of something 127 pages long.

The plot centres around the two oldest children of a family bereft of parents and what happens when adults aren’t around to maintain the social status quo. If you’ve read Lord of the Flies, imagine that with a female.

McEwan has a reputation for starting his novels magnificently and then running out of inspiration about halfway through. There’s certainly no indication that this was to come from his debut. The prose fizzes along right until the end which, although somewhat predictable, is nevertheless surprising in its clarity. McEwan was definitely out to make an impression.

If you’re new to McEwan, it wouldn’t be a bad idea to start here, where McEwan himself started.