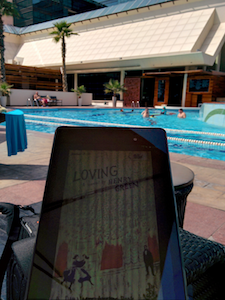 Context: Read this at the hotel pool in Dubai when I attended the Inter-Gulf Netball Championships.

Really didn’t get into this. It’s not helped by the unorthodox dialogue which I had a hard time following at times. There are some half-memorable characters in here but the whole thing seemed a bit pointless to me. I couldn’t for the life of me figure out what Henry Green was attempting here.

The book opens with the death of the butler in some decaying out of the way house occupied by a wealthy English couple in Ireland at the start of the second World War. His second in command hastily assumes his role and sets about controlling the house and staff his own way which most of them don’t take very kindly too.

There are about fourteen million women who work in the house who are either very young or very old and I couldn’t keep track of the family members partly because there’s no real consistent naming conventions for them. Different characters call them different things and I got well-confused most of the time.

Nothing really happens either, which isn’t really what you expect in an upstairs v downstairs novel like this. There is a bit of a to do when one of the lady’s rings goes missing, and that’s dragged on for quite a while, but all just kind of fizzes out. The novel kind of follows suit.

If I could spell meh, I’d probably say that this novel was, for me at least, meh. A forgettable novel that, Lord help us, is part of a trilogy. I gave him points for an original style but even that made novel harder to read than it needed to be.

I’m kind of hoping someone more enlightened can pass by and tell me what I missed.