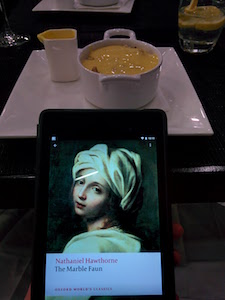 Context: Flying back to Bahrain the Etihad lounge in Manchester served up an amazing apple crumble while I was reading this.

This was a grind. I really don’t have much time for Hawthorne and this was a bad Hawthorne.

On the surface, this is about a group of USAnian young people who spend time in Italy doing everything but being realistic. Their wealth obviously enables them to avoid the banalaties that the rest of us have to deal with, like cooking, cleaning, and generally earning a living. Thus, they can afford to prance around in art galleries, pursue their belief that the art they do is important somehow and, unfortunately for the reader, spend hours in lofty discourse on love, art, friendship, philosophy, and a whole host of subjects that the rest of us will have time to discuss once we’ve finished the dishes.

Their wealth also gives them, as it does for all of us, a falsely romantic notion of rustic poverty and their own importance to society. I could go on to describe what happens to them through the course of the novel, but I simply can’t be bothered. Despite there being a sort of plot, it meandered and ultimately vanished in the sands of the characters’ flowery prose. I wanted to slowly and very deliberately put them all to death.

Hawthorne hasn’t here written a novel where this is only the surface. Unfortunately, I think that, deep down, the novel is pretty much about the same thing i.e. an excuse to philosophise on stuff that will all be very well once we’ve sorted out the Zica virus, the tide of Syrian refugees and why the spare room is in such a state.

For me then, this was the worst form of writing: pointless navel-gazing that lacked reality and therefore relevance. In fact, it was as if he was channeling a deluded character from his previous novel, The Blithedale Romance! I fully understand why Ralph Waldo Emerson described it as “mush.”

Thus ends my reading of Nathaniel Hawthorne. I started with The Scarlet Letter. I should have stopped there, too.

Next post: 0533 | The Life and Adventures of Nicholas Nickleby | Charles Dickens