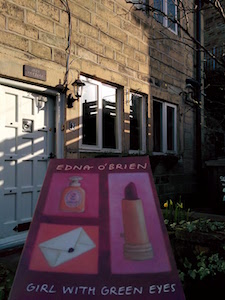 Context: Had a lovely week in this tiny cottage in Yorks while reading this.

A looooong time ago in the decade old life of Arukiyomi, I read August is a Wicked Month. That was my first taste of O’Brien’s work and it’s been too long since I’ve been back. Her writing is always heavy with meaning and carefully crafted.

Although this didn’t live up to August, I did enjoy it. It’s a tale of young love set in O’Brien’s native Ireland. What action there is takes place in Dublin or the countryside nearby.

But this is not a novel about action. It’s a novel about a clash of cultures. O’Brien skilfully uses the medium of a woman in her early twenties falling in love with a much older (and essentially a much more married man) to portray the gap between contemporary Irish culture and the traditional.

Traditional Irish culture gets treated mercilessly. We have the
religious bigots and hypocrites, the decaying Irish village, the village weirdos, the controlling family, the damp housing … even the weather and landscape away from Dublin fail to find sympathy with O’Brien.

Against this backdrop, you have the young country girl struggling to find her new identity on various levels as both Dublin and her new lover inspire her to conquer her fears and forge her path.

The only judgment here comes from those too prejudiced to have an objective viewpoint. I’m tempted to include O’Brien herself in that. Not only, as I’ve said, does she not have a good word to say about the traditionalists, but she fails to provide any tangible exploration of the failings of the new culture that is emerging.

In this she disappointed me. No culture is perfect. Present-day cultures which condone the so-called freedoms of adultery, infidelity and the myth of premarital sex apparently without consequences will be condemned, as every other culture has been, by history itself. This makes the novel important for capturing the essence of its time, but its weakness for me was that it did not transcend this.