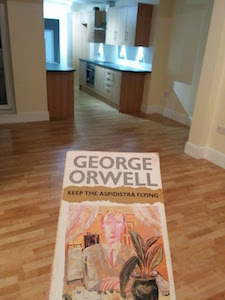 Context: Read this while my house in the UK was totally refurbished.

Orwell’s flawed but nevertheless important novel about a young man’s single-handed struggle against capitalism is an easy and often amusing read.

Gordon Comstock, whose inflexible philosophy drives him further and further into destitution, starts out in a low-paid but reasonable job with a reasonably attractive girlfriend and semi-decent accommodation. But each of these reminds him only of his servitude of a system he loathes. As the novel progresses, he gradually abandons one after the other.

It’s a tragic and lamentable tale, not least because the honest among us all sympathise with the inability to maintain our ideals in a world which falls far short of perfect. As Gordon takes yet another ill-considered course of action of which he is the only victim, you can’t help but wince despite understanding his motivation.

It’s only his friends that stand firm while all around him crumbles and this leads to an ending that, for me, seemed more like Orwell compromising his ideals rather than his character.

Again, like Tender is the Night which I’ve just reviewed, my greatest interest in the novel was the discovery that it mirrors so much of the author’s own experience. Knowing that really does add a dimension to reading it that simply wouldn’t be there otherwise.

Orwell can definitely spin a yarn and, for me, this is an important novel because it shows how the art form can be used to communicate an ideal so much more realistically than any treatise can. I’d find it hard to motivate myself to read about alternatives to capitalism in non-fiction form. But give me a novel that explores the subject and I’m fascinated and will emerge far more able to debate its merits. Orwell was very good at that even if his ideals were not, alas, cherished by the world he wrote for.