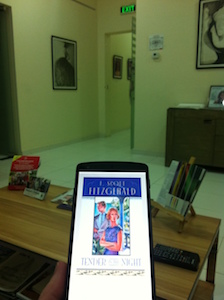 Context: Attended excruciating physio sessions for a my torn calf while reading this.

A lot more readable than The Great Gatsby which I read many years before Arukiyomi was born, this was a decent enough novel. I found that as long as I focussed on the relationships between Dick Diver, his wife Nicole and young starlet Rosemary who intervenes between the two, I could maintain my appreciation for Fitzgerald’s writing. As soon as I attempted to place this in reality, things started to fray a bit.

Take this single sentence for example:

Now – [Rosemary] was thinking – I’ve earned a time alone with [Dick]. He must know that because his laws are like the laws Mother taught me.

This girl is supposed to be 18 or so years old and on her first trip overseas after suddenly having fame and fortune thrust upon her after her screen debut. Now, I don’t know about you, but when I was 18, I simply did not think about people like that. Heck, I’m nearly 45 and I don’t think about people that deeply.

To me this is simply bad character construction. For me, a novelist, can’t just have lots of ideas you want to convey and then forget about the medium for conveying them. You’ve got to put those ideas into the right packaging for delivery, so to speak.

As the book moves on to midway and the final half, Dick comes into his own. There’s a lot of the author in this character and so he’s much more believable than the female teenager that Fitzgerald is trying to cram his middle-aged male mind into.

Actually, the thing I most enjoyed about the novel was seeing Fitzgerald through the character of Dick Diver. He didn’t have the happiest life and I often wonder whether the story of the novelist’s life would in fact be more interesting than their novels. In this case, I think it might!