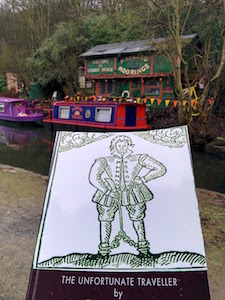 Context: Read this while staying in a cottage along the Rochdale Canal.

It’s a picaresque novel and arguably one of the first and this has earned it a place on the 1001 Books list. It’s almost definitely the shortest because writers of picaresque novels never know when to shut up. It’s a genre which I’m grateful has dropped out of favour with modern readers and writers.

I can barely remember what happened, not least because my edition was a reprint of the original text complete with original spelling which, compared to modern standard spelling, requires some lateral thinking to process. Then there’s vocabulary which we simply don’t use anymore for which the Internet was essential.

Then there’s a story which isn’t as straightforward as simply a guy going on a jaunt overseas (why must picaresque novels always head overseas?) There were twists and turns of ‘plot’ and the obligatory japes and close calls. I say ‘obligatory’ but, of course, Nashe was one of the first to do this. The popularity of the form in later years testifies to his influence, at least on the English novel.

I wouldn’t bother rushing out to get a copy of this unless you are a real die-hard lit fiend. Having said that, if you are, you’ve probably already read it. What did you think?