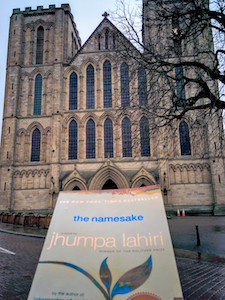 Context: Went to a rather lovely wedding at Ripon Cathedral in the UK while reading this.

Not the best novel I’ve ever read. I can’t really think why this should be on the 1001 list except that it was introduced from the second edition onwards to counterbalance the white-male-author predominance of the first list.

There’s nothing here that the world of fiction hasn’t seen before. V. S. Naipaul’s whole career was built on writing that explores the confusion of identity that comes from cultural displacement. He got the Nobel Prize. I don’t think Jhumpa will be shortlisted anytime soon.

For me, this was one in a series of five random reviews that see biography passed off as lightly veiled fiction. Jhumpa is, like her protagonist Gogol, the victim of parental emigration and mistaken identity by culturally short-sighted school teachers. She too was carted backwards and forward to Kolkata to see relatives she barely knew but which her parents insisted were her ‘real’ family. And it was also her who struggled to break free of these childhood tethers to establish her independent USAnian identity.

While I suppose it’s natural for writers to draw on their own life experiences both for inspiration for characters and plot as well as for the passion that drives them to want to communicate something, it certainly saves the hard work of trying to understand anyone else’s situation.

And reading more about the novel and particularly the film that was made of it, I can’t help wondering if this is simply a vehicle for self-indulgence. After all, Jhumpa not only made sure that the kitchen cabinets in the Gangulis’ kitchen were the same colour as her own family’s, something that would mean nothing to anyone but the Lahiris, but she also couldn’t resist her and other family members taking cameo roles. Hmm…

So, is this an important novel? Well, it’s readable, but I couldn’t help thinking that it was a little late in the day for a novel that focussed on issues of migration. Published in 2004, the world is a far more connected and culturally heterogenous place than it was, say, in 1976 when I was taken overseas by my parents. I’ve already referenced Naipaul’s work (Enigma of Arrival (1987) in particular), and, without much thought, Jean Rhys’ Wide Sargasso Sea (1966) or Tayeb Salih’s Season of Migration to the North (1966) also come to mind.

I’ve got a feeling that this one won’t be anywhere near memorable than those for me. It seemed like an an okay novel which was readable enough but, for me, there’s something about it that makes it fall short of being important. Maybe time will prove me wrong, but for now, I just wasn’t that taken with it.