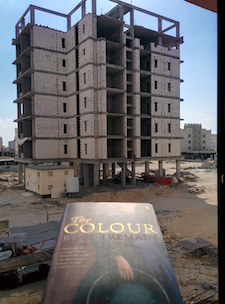 Context: They finished pouring the concrete frame for the building next door while I was reading this.

This was removed from the first edition of the 1001 Books list and it’s not hard to see why. Although Tremain can write a decent yarn, there’s nothing here that I could see which has pushed the boundaries of the genre of the novel.

The story focusses on western settlers in New Zealand at the turn of the last century. To set the scene, there are the usual hardships mostly caused by the typical mistakes of someone in a completely alien environment assuming they know what’s what in the face of local advice. These serve to reduce the protagonists to desperate measures which drive them to the banks of a river far from where they started risking everything in search of gold. Along the way, there’s plenty of marital tension, a feeling that each character is a world unto themselves which no one else can fathom and, for any guilt-ridden white novelist trespassing on the Antipodean setting, the obligatory side-story with a local native.

The Independent review on the cover of my edition said that Tremain has “an enormous story to tell.” I will admit that she tries very hard to cram in an awful lot into 350 pages. Ironically, for a novel which has a lot of gold mining in it, she didn’t dig deep enough for me. The novel jumps around all over the place and never seems to settle on telling any one character’s story thoroughly enough for me to feel that Tremain really has any incisive power to explore the human condition.

Although she may have borrowed many of Tremain’s ideas, I felt that Kate Grenville’s later novel The Secret River does a much better job of exploring the issues of being an early settler down under. As for the gold rush theme, I’m not really sure what, if anything, it lent to the novel except to add in plot what was missing in pathos.

So, a light read if you’re about to get on a plane; don’t expect more than to be entertained.