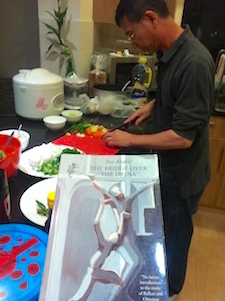 Context: Read this while we had a couple of couchsurfers who cooked us some amazing Chinese food.

This is a masterful portrayal of Balkan history which, for anyone not familiar with it or, like me, familiar but confused, is a great way to gain more understanding.

The bridge is built 500 years ago by the ruler of the Ottomans in memory of the homeland he was stolen from. Andrić chronicles the history of the town of Visegrad chapter by chapter from before the bridge until the start of WW1 with the bridge playing a central role in each chapter either as a character in its own right or as the backdrop for a fascinating series of historical individuals.

Certain chapters stand out markedly from others: the punishment inflicted on the leader of a rebellious group drafted to build the bridge; a suicide; a drunken walk; and ultimately the fate of the bridge itself.

The genius of the writing lies in the way Andrić weaves historical people and events into the narrative so that you get an overview of 500 years
of history by just focussing on what is in effect the result of a civil engineering achievement. You meet all sorts of characters from all sorts of backgrounds and, through this, are able to piece together the various factions that have created the fractured Balkan landscape we have today.

The writing’s not easy. This isn’t historical fiction as we know it today, thankfully. It’s deep, ponderous and finely crafted. Take your time with it. He didn’t win the Nobel Prize for nothing.

Even so, I found it a bit hard going at times when nothing much seemed to be happening and, as the novel nears its end and wider political events make their presence felt locally, Andrić seems to run out of central figures to portray the history with. Instead, he relies on local youth who aren’t as strongly drawn as his earlier characters. I thought this a shame, particularly when the earlier writing is so very, very strong.