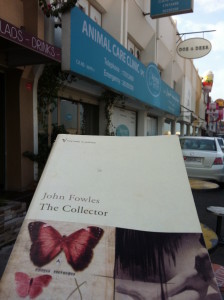 Context: Read this while we took Nanika (our cat) to the vet. Turned out she was fine.

With this creepy tale of captivity, Fowles slinked onto the literary scene in the early 1960s. It’s one of the strongest debut novels  you’re likely to read and also one of the most memorable, although elements of its plot have been recycled countless times in novels, plays, TV dramas and films ever since.

Fred is a loner obsessed with collecting butterflies and a young university student called Miranda. His fixation with Miranda is entirely justified in his own mind and winning a large sum of money gives him the privilege to indulge his fantasy of living a life with her, albeit at the expense of her own freedom.

The novel is cleverly crafted from two points of view both of which feel extremely claustrophic to the reader. That of Fred’s is logical, devoid of emotion, calculated and paranoid. That of Miranda’s is a whirlwind of conflicting emotions, snobbery, loathing and a longing for what she regards as the people and things that hold true value in life.

Fowles very intelligently plays with the reader’s sympathies so that, by the time the novel ends, you find yourself re-examining the convictions you hald at halfway, when all you had was Fred’s perspective. Thus, there is conflict not only between the characters but within you as a reader as Fowles forces you to hold your own moral judgement up to scrutiny.

There’s no question that what Fred is doing in holding Miranda captive is wrong. His motivations though are not as cut and dried as you’d like them to be. More troubling is that Miranda isn’t as innocent as you’d like her to be either, on a number of different levels.

The novel concludes in an even more troubling way leaving you wondering what on earth the future holds. For Fowles, the future held some much more important but no less challenging novels for those who want to engage with them. No more so, I think, than The Magus, where the ideas that he first explores in The Collector come to maturity with a far more complex and rewarding novel.