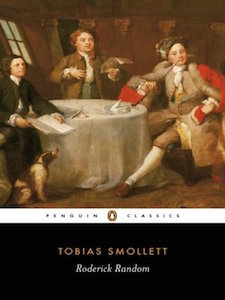 Context: Read this while I began training other team members how to build ebooks.

Having read Peregrine Pickle, the novel Smollett wrote after this one, three years ago, I kind of realised that, like with Henderson and Herzog, I’d read these the wrong way around. Smollett made his name with Roderick Random and then went on to perfect his style with Peregrine in much the same way that Bellow did, not that I find Smollett anywhere near as engaging as Bellow.

If you’ve ever read any picaresque novels, you’ve read Roderick Random. Interminable japes lead to misunderstandings, wheezes, a dice with death or two and enough characters that Dickens, 100 years later, had no shortage of inspiration. There’s nothing particularly new here for the modern day reader, and if you want to distract yourself for a few hours, there’s no harm in it.

But, as with Peregrine, it does tend to go on a bit, although Peregrine goes on far, far longer than Roderick does. Plus there are some satirical and historical references that may fox our understanding today. The fact that the novel does travel overseas (or at least the characters literally do) means that there are some interesting diversions on the way.

So, an important book for literature and one with some distracting adventures, but not one I’d urge you to rush out and read.