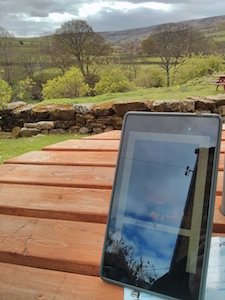 Context: Was reading this while we took a gorgeous walk in the Yorkshire Dales and stopped for a cuppa.

Boy this took ages to read. Just couldn’t really get into it until the last 100 pages or so. Couldn’t really place my finger on why, but I think it was just too much of the Bellowesque introspection going on.

If you’ve read novels like Herzog, you’ll know what I mean. But whereas with Herzog, it all takes place in one continent, with Henderson, you find yourself kind of inexplicably in Africa for most of the novel. Quite why this is, even the protagonist finds hard to fathom. It’s almost like Bellow had a pretty good jaunt on a safari or, more likely, read a couple of volumes of Speke’s memoirs and thought it would make an interesting literary diversion. I couldn’t quite see the point, but you can’t very well work a lion into a novel set in Wyoming.

Inevitably, there’s the white-man-cometh-as-the-big-white-saviour kind of complex which results in one of two most memorable scenes in Bellow’s writings as Henderson tries unsuccessfully to deal with a plague of frogs. Driven out of one community, he ends up in another where his relationship with the king leads him to the novels climax and a memorable death scene which is quite powerful. Don’t worry, speaking of death in a Bellow novel is hardly a spoiler. His work is littered with musings on it.

Between these two memorable episodes, there’s an awful lot of navel-gazing as Henderson’s internal questioning of life, the universe and everything spills out into long philosophical exchanges with Dahfu, the king. These were the bits that just made the book tedious for me. They’re not a patch on the thought processes that Herzog, his next novel, describes. But, as with all art, Henderson is a sketch on the way to later masterpieces. Herzog packs in and perfects all the elements of life’s angst explored in Henderson and the even earlier Seize the Day. And it does it masterfully. I just felt it wasn’t fully developed in the character of Henderson.

So, do read Henderson, but do so before Herzog and make sure you follow it up with the latter just as soon as you’ve recovered from Henderson‘s intensity.

Next post: 0516 | The Adventures of Roderick Random | Tobias Smollett