What the chart of my progress below does not reveal is that the day I started this was in fact in May 2013 whereas I didn’t finish it, after a vast effort, until Sept. 2014. I used to read a great amount of non-fiction and this kind of history in particular. With that experience, I can tell you that Barr excels at taking what is a complex and intriguing series of historical events and rendering them as dull as watching water evaporate.

If you’re into writers who can actually write this kind of book (Tolland, Shirer, Fisk or Beevor come to mind), you will be very disappointed by Barr’s inability to make any character memorable or to connect themes so that you feel like you are following some kind of connected historical narrative. Individual chapters are a complete lottery. Some are fast paced and focussed. Others seem to be inserted just to pad the book out.

This is a great shame because there aren’t many books out there that deal with topic for the layman. After all, we are all living in the legacy of the horrendous decisions that Britain and France made at the time. It is the responsibility of the writers of history to interpret the past so that we understand that the present is its result. Barr fails to do this in an engaging manner and thus risks burying this message in badly constructed narrative.

The writing aside, I came away with my dislike of the role of the French in 21st century history reinforced. Common belief was that they were our allies in WW2. They were, but only so far as it served to rid them of an enemy they couldn’t keep at bay themselves. Meanwhile, they were very much stabbing Britain in the back in the Levant. More of their despicable exploits should be widely known: their needless massacre of Syrians after WW2 and their arming of Jewish terrorist groups being two that Barr brought to my attention.

But Britain comes off scarcely better. Desperate to oust the French from the area, they connived with any and every Arab faction that was sympathetic to this cause. And it is the direct impact of their policies on Jewish/Palestinian populations in what was to become Israel and the West Bank which we see on the news virtually every day. We got involved where we should not have done and screwed up.If Barr could write better, more people would know this.

This last book in the series completes my reading of Farrell’s Empire trilogy. I wish I’d read them in order. I actually read them back to front. Troubles is a perfect…

Context: We wandered down to the beach a number of times to watch the sun set over the volcanoes of Rabaul while I was reading this. REVIEW My sixth Woolf… 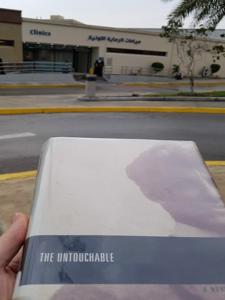 Context: Discovered the music of Eric Bibb while reading this one. Love it. REVIEW This is a bit mistitled I feel. Perhaps Kenelm felt that a name like Mambu would…