Context: Finished this as I was waiting to check in for my flight to the UK from Bahrain airport.

This Ass is packed with tales that are as full of characters as they are hard to follow. Make sure you get yourself a good translation of this if you want to have half a chance of following what’s going on as there are stories within stories. I reckon this is where they got the idea for Inception from.

The very basic moral is that messing with magic doesn’t pay. Experimenting, Lucius the author and narrator turns himself into an ass, albeit a very nice one. The solution to his plight turns out to be simple: eat a rose. But before he can do so, he is stolen by a band of robbers and his adventures begin.

I tried very hard to keep up with the plot/s but lost it/them several times. So, I found the book a bit confusing and sometimes it took a while before I realised where I was and what had happened. But then, I felt the same way about Ovid’s Metamorphosis too. I’m just thankful I wasn’t born 2000 years ago and only had this to read.

However, this is an extremely important and influential book, not least because it is the only complete novel we have left to us in Latin. Many writers have been influenced by it and the stories it contains. As a result, how I felt about it doesn’t count for much. This is on the 1001 list and so it should be.

This might reveal the ending. If you want to see the quote, click [spoiler]Finally after a few days, the great god Osiris appeared to me in the night, not disguised in any other form, but in his own essence, commanding me that I should be an Advocate in the court, and not fear the slander and envy of ill persons, which bear me grudge by reason of my doctrine, which I had gotten by much labour: moreover, he would not that I should be any longer of the number of his Priests, but he allotted me to be one of the Decurions and Senators: and after he appointed me a place within the ancient palace, which was erected in the time of Silla, where I executed my office in great joy with a shaven head.[/spoiler] 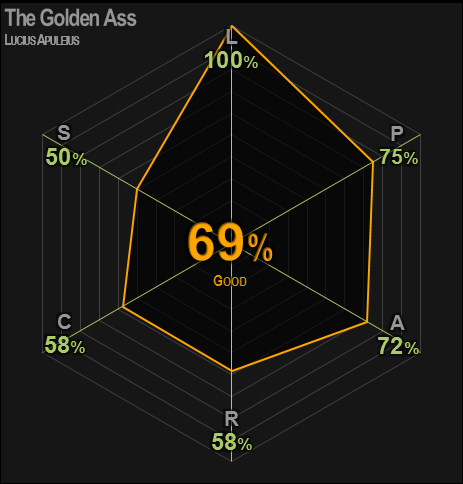 Read more about how I come up with my ratings

Next post: 0438 | ADMT I: A Question of Upbringing | Anthony Powell