Context: Projects at work saw me back in video editing while reading this. It’s been a while and it’s good to be back.

This was and wasn’t what I expected. I think I underestimated the historical context and so failed to appreciate the significance of the story I was being told. I found out after I’d finished it that this was effectively the first novel by a Black woman to be so graphically descriptive of the issues that all Black women were facing in the US at the time. Thus, it broke literary barriers and set a standard that has rarely been matched, in part because society has moved on, albeit not entirely.

This first volume of Angelou’s seven volume autobiography, tells the story of her growing up away from her parents in the southern US. Segregation was a daily reality and the two encounters with White people are shown in their horrific detail. But it was, ironically, at the hands of one of her own family that Angelou was to suffer most with an episode that it must have taken considerable courage to relate even 30 years after the event.

The writing style I found frustrating. On the one hand, Angelou is a master storyteller who has an ability to craft poetic prose and use metaphor to an astonishing degree. But there were pages and pages where the writing seemed very banal, events were narrated with a humdrum and routine monotony that made me wonder why the writer was bothering to relate them. This inconsistency was my only gripe with a book which has a huge legacy and an impact on US literature to this day.

The act of rape on an eight-year-old body is a matter of the needle giving because the camel can’t.

I find it interesting that the meanest life, the poorest existence, is attributed to God’s will, but as human beings become more affluent, as their living standard and style begin to ascend the material scale, God descends the scale or responsibility at commensurate speed.

I knew I knew very little, but I was certain that the things I had yet to learn wouldn’t be taught to me at… school.

She turned out the light and I patted my son’s body lightly and went back to sleep. 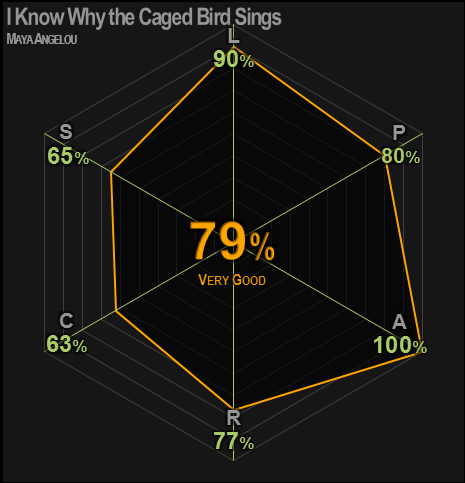