The last of Wells’ works that was on my tbr list for the 1001 books. Wells occasionally delights me, but, on the whole, though I do regard him a genius and a mind a century ahead of his time, his writing doesn’t really grab me too much. Tono-Bungay was just such a novel.

George is lured into working for his uncle who has concocted some potion that he is flogging off as a cure-all. It’s nothing of the sort though; as the business grows exponentially, like most things these days, rather than this demonstrating a superior product, it simply demonstrates superior marketing.

Eventually, the ethical skeletons come out of the closet of morality and give George nightmares he can’t escape from without his whole life imploding. Or can he?

What I did appreciate about this book, coming as it does between those classics of sci-fi The Time Machine and The War of the Worlds, was  that it was Wells turning his brilliant mind to something less alien: our everyday capitalist lives. I’m used to him dealing with more esoteric subjects like… well, like time travel or alien invasions. But this novel revealed that he very much understood not only his times but those to come. Quite a few of those who grace the front covers of our magazines might want to read a copy of this.

There’s much more character development in this novel than in any other I’ve read of Wells. I other works, his characters seem to be dominated by the crisis at hand. In this one, it’s very much the impact of crises on a character that is the focus. It’s like Wells suddenly realised you can see through both ends of a telescope.

The weakness in the novel was, for me, the style. However, I’ll put this down, not to any lack on Wells’ part, but to the fact that while he is a writer ahead of his time, I’m a reader very much in or quite possibly behind my own time.

We are all things that make and pass striving upon a hidden mission, out to the open sea. 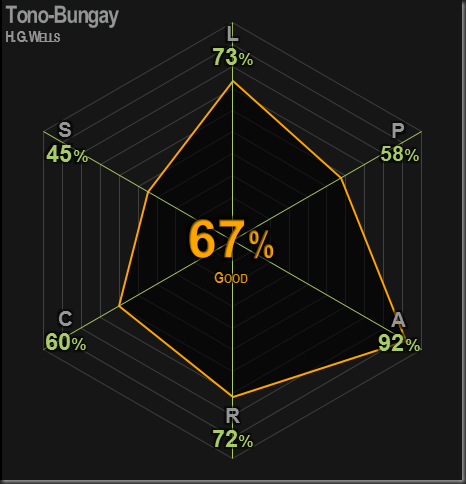 Context: Picked this up from a certain university library and finished it while babysitting for my sister. REVIEW Read Midnight’s Children a long time ago and thought it was fantastic,…

Context: Audiobook which I listened to on the way to and from private business classes.REVIEW Poetic, intimate and moving at times, this is a good book. However, the novel is…

Context: Started and finished this in the garden as I’ve taken to 30 mins a day pottering around there ridding my body of office toxins. REVIEW The first audio book…

This one really got me. Maybe it was because I was also reading the abonimable In Search of Klingsor at the time, a novel that would make any other author…

A strange novel that faded from my memory within a few days of reading it. My third short novel in a row and, like the others, it runs out of…