Ishiguro has written some of the best books I’ve read. This is not one of them. Granted, it’s his first published novel so this is understandable. But this one simply didn’t go far enough for me.

Etsuko remembers the time when she befriended Sachiko and her daughter in post-war Nagasaki. Sachiko appears to need the support of a friend but, at the same time, considers herself able to adequately provide for herself and her daughter, a girl who seems to have a number of emotional, possibly mental, issues. These episodes are flashbacks from Etsuko’s present day in the UK. There’s no real plot to speak of that overarches both periods, and some characters are only very briefly shadowed. You never really find out much about Etsuko’s husband, for example who is mostly just observed from afar by his wife.

There are definite glimpses of what Ishiguro would dazzle us with later in his career. There’s the enigmatic characterisation that leaves you wondering if you really know the characters or not. There’s the atmospheric prose which is almost a character in itself. But there’s nothing like the engima of Never Let me Go or the prose of The Remains of the Day.

This is perhaps the result both of the start of his stylistic experimentation as well as the length of the work. It’s only 183 pages long. The Unconsoled is well over double this length and therefore allows Ishiguro to write prose of playful, childlike abandon and thus to elope with your imagination. I guess that’s what you can afford to risk when you are already established. seems restrained and cautious by comparison.

This is not a book I’d come back to, but as a milestone in the career of one of our best contemporary writers, I can see its importance. 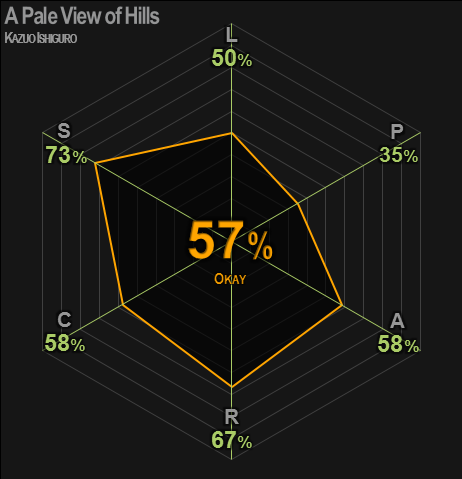 If Iain Sinclair wants to know how to eradicate plot but nevertheless write a novel that is at once funny, poignant, moving, funny, sad and tragic, he should put down…