Context: Finished this off just a few days before I left the UK to start work in Saudi Arabia.

I usually breathe a sigh of relief when I finish a “classic” like Wildfell Hall. I certainly did after Persuasion which I shall review shortly. But Anne’s classic has a lot to offer despite suffering from the romantic literary afflictions of its time.

It’s been a while since I finished this. I’ve been busy moving job and country and getting the 1001 Books App through the next stage of its development. So, I won’t lie to you and pretend that I remember the storyline much or that the book made a huge impression on me.

But I think that if I had been a woman at the time it was written, I would have found some of it scandalously exciting. This is because it largely consists of a woman fighting her way through the world while married to a character who is designed to epitomise the worst about men who are, lets face it, probably the second best gender of humanity.

As a result, I do recall that there were scenes where, for a woman to behave as this protagonist does, was fairly shocking for the time. The book obviously has a significant legacy even if it isn’t as gripping as perhaps we’re used to these days. It’s worth a read if you are willing to make some effort to understand its historical significance. Actually, it’s probably worth a read even if you don’t.

We are just now looking forward to the advent of you and Rose, for the time of your annual visit draws nigh, when you must leave your dusty, smoky, noisy, toiling, striving city for a season of invigorating relaxation and social retirement with us. 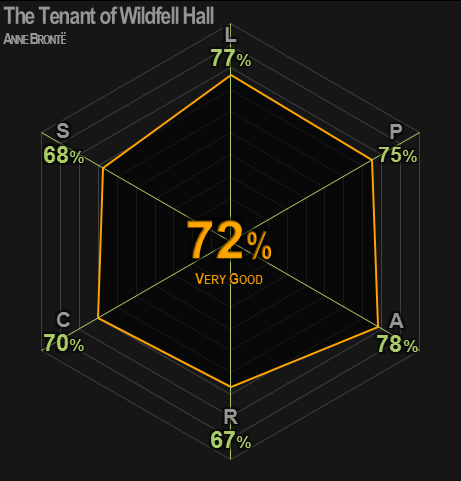