Like Bury My Heart at Wounded Knee, this is the agonising tale of humanity bravely told. Fisk displays the full range of his encyclopaedic knowledge of the Middle East, knowledge gained by 30 years of first hand experience on the front line of pretty much every conflict the area has seen in that time. Many would struggle to write this even if we had the world’s greatest libraries at our fingertips. Fisk managed it without even using the Internet (something he despises).

I don’t want to give you the impression that this is an easy read. For a start, it is nearly 1,300 pages long. Secondly, and again like Wounded Knee, it’s crammed with the details of the worst we can do to each other. The torture and abuse, often in the name of governments who deny these behaviours, are often stomach-turning.

There are some amazing vignettes there. Fisk is a fantastic story teller. He grips you with this ability from the very first page. His near murder, his meetings with Bin Laden, assisting John Snow in a rescue operation – all of these are excellent. But the episode of him tracking down the very men who manufactured a missile used to kill innocents must rank among the greatest examples of investigative journalism in Middle Eastern reportage.

Along with the terrible historical descriptions and the spellbinding stories, Fisk also spends a great deal of time putting across his own point of view. And he is not a man who pulls his punches. I would estimate that somewhere between 1/3 and 1/2 of the book consists of him releasing 30 years of anger. This bellicosity seems a natural reaction to the events he has witnessed. But it is a curious stance for someone who, I assume, would prefer peace after so many years of seeing to conflict. I’m not sure that his rage does him any favours although many of his arguments are forceful and backed up with much historical veracity.

At its worst, the book is simply wrong about many things that more judicious editing would have picked up. Jerusalem is not the birthplace of Christ: one example of many such errors. But I admire anyone who can edit a book of such length and for a writer of such hard-headed conviction. That must have been an even harder job than writing the book in the first place.

At its best, this is a magnificent achievement. It’s a book that will definitely challenge, if not change, your outlook on why the Middle East exists as it does it today. More importantly, there are intimate stories in here of people who have suffered almost anonymously and beyond our comprehension. Their tales should rightfully be told; they have earned more than a moment of our consideration. 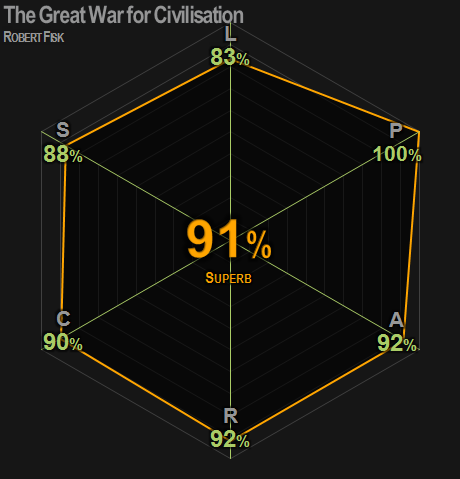 Context: while I was reading this, the guy who owns the house we’re living in broke his ankle. REVIEW My wife’s aunt gave me this one for Christmas…. (ahem) Christmas…

Dear Lord, spare me. Another title from Latin/South America and yet another novel that I could have done without. What the heck is it with that continent that I just…

This is a wonderful little breather from the typical weighty tome on the 1001 Books list. A lighthearted look at urban Victorian everyday life with a character which has had…

Not really sure why this is on the 1001 books list. Didn’t grab me. Seemed a bit too much like navel-gazing for the Cambridge set (e.g. “we went to Browns…