Context: We had a freak weekend of snow in early April while I was reading this.

Very quick read this one and it’s been a while since I dipped my feet in Russian lit. This novel brought it all back to me and would be a great intro to anyone wanting to find out what this genre’s all about.

The novel is written under a pseudonym. There are still debates about who actually wrote it. But it contains all you want in a Russian novel: brooding self-absorption, moral decay, the hated or absent conscience of the individual, and the gradual plunge into doom and despair. Lovely!

But while he descends into the dreamlike world of addiction, the writing seems to maintain its clarity. This I thought a weakness of the novel. Surely, if someone is writing their own account of drug abuse, you’d expect something a little less lucid, something more like this, in fact.

And it’s a very modernist novel in that there’s no real comment on drug abuse and its effect on society. You are left to assume that from the prose and come to your own conclusions for the most part, although here and there, Ageyev gives hints such as 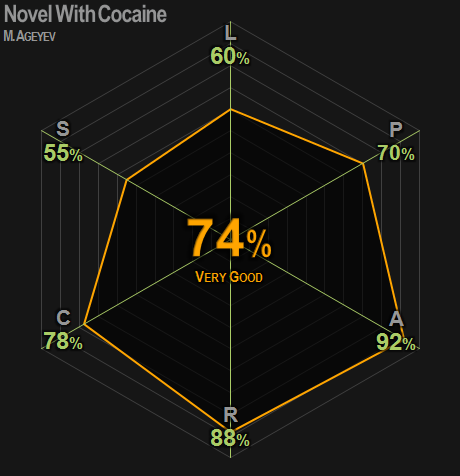