There, in a charity shop, completely unblemished as in a proper bookshop, lay Weir’s encylopaedic description of one of the most magnificent courts of English royalty. And it was mine for only 95p.

I’ve not read any of Weir’s books before. She’s written about pretty much every Tudor monarch or individual connected with Tudor monarchy you can think of. I used to read books like this all the time but the 1001 list has my heart set on novels. Because this was immaculate and a tenth of the price it was supposed to be, I snapped it up though. It sat well with my reading of Mantel’s Wolf Hall and Bring up the Bodies.

There are plenty of reviews out there which complain that this book isn’t actually about Henry VIII at all. They complain that it’s hard to find the king, buried as he is under the detailed descriptions of the world he inhabited. Having read the book, I agree. This book should really be entitled The Court of Henry VIII.

But that didn’t bother me too much. I wasn’t after a blow by blow description of his life. I was after a description of the times, and although the book was mis-named, I tried not to let this distract me from what is after all a good history.

There’s not much narrative thread though, and readers should be forgiven for thinking that because the opening line starts with the death of Henry VII they’re going to get a chronicle of the next 40 years. They’re not. What they do get are just over 500 pages split into 63 chapters. This works out at just under 8 pages a chapter. While this seems quite short, the book is printed in something like 5pt font. And each of these chapters deals with a different facet of the court. I’ll admit, I found it slow going.

Wait, no! He didn’t have syphilis! This is a common myth and one of many that Weir debunks in her attempt to get at the truth behind a man who was very much larger than life. In the end, he appears as one who ruled according to the beliefs of his day. Let’s not forget that these shifted like the sands of the Thames estuary and doomed many who attempted the passage.

Henry was a magnificent statesman, of that there is no doubt. He may well have even been the preeminent one of his day. But he was a product of his time and Weir shows this very well. It is a flattering portrayal.

However, like the wardrobes of the day, Weir’s writing is weighed down by almost ludicrous attention to detail. There are more characters in here than a Russian epic and it’s hard to keep track sometimes of who is central to the events described. There are long lists of things, clothes, purchases, buildings, gifts, animals, etc., etc. It’s all a bit too much sometimes.

If you are a fan of the Tudors and not too much of a fan of Henry, you’re going to love this. If you are after a more traditional biography of Henry himself, be warned that this might be a frustrating read. 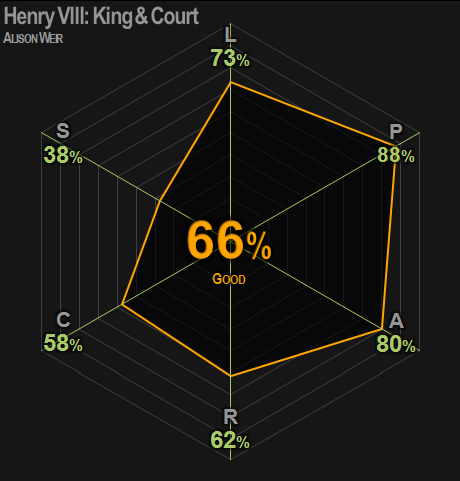 Many regard Portrait as James’ greatest novel. What they mean by this, of course, is that it’s the easiest to read. Written before James went off on the subordinate clause…

I usually breathe a sigh of relief when I finish a “classic” like Wildfell Hall. I certainly did after Persuasion which I shall review shortly. But Anne’s classic has a…

Context: Picked this up in an apartment with a view of the Bernese Alps where we stayed in Switzerland. REVIEW Norman Grubb is a bit of a legend. He spent…