Right, I think it’s time to share the news with the faithful few who follow this blog: I’m off to Saudi Arabia in a few weeks to work teaching English for an oil company. So, in preparation for that, I went a-browsing in Waterstone’s a few weeks ago. This was one of a handful of books that dealt with Saudi. In fact, this was the only book explicitly about Saudi that I could find.

Hammoudi is an anthropologist, a Moroccan by birth and a professor at Princeton. By his own admission a nominal Muslim, he undertakes the complex and confusing process of making the pilgrimage to Mecca both to assess it from an anthropological point of view and to see what impact it has on his faith. I was interested in both.

If you are hoping for a travelogue of a journey to Mecca and back, you’d be disappointed. If you are hoping for an anthropological treatise, you’ll also be frustrated. This kind of falls somewhere in the middle and, perhaps because of that, like a chocolate bar for breakfast, it leaves you ultimately unsatisfied.

The descriptions of the bureaucratic nightmare that going on the hajj requires are excellent. The suffocating, strenuous whirlwind that is the pilgrim’s experience once they reach Medina and Mecca is also a real mind-bender and, if you’re a non-Muslim, will make you grateful you don’t have to do it.

At times, Hammoudi reflects on his own response to the journey, to Islam, to Saudi, to humanity. The hajj is just another example of humanity’s attempt to build a ladder to heaven. No matter how zealous we get in our religious affairs, the very stuff we’re made of will always rise to the surface:

…even a dozen meters from the Prophet’s tomb. Each time goods or services were distributed, each time a goal had to be reached, the religion of Me, Me first, Me before everyone else pushed Islam to the edge.

When you consider that Islam means submission, I think he’s being generous here.

The stipulations about how the pilgrimage is to be performed are as demanding as walking a tightrope: one slip and the entire event is a waste of time. This is scary stuff. It made me thankful yet again that I follow a guy who talked of grace.

Had the book been a combination of the above, it would have been an excellent piece of travel writing.

But what let the whole thing down is that, being a professor at Princeton, Hammoudi seems to feel obligated to pad large sections of the book with the kind of stuff only the intelligentsia would claim to understand. It made me wonder whether this was required by some funding he might have got or an overzealous publisher. Either way, it reduces what would have been an excellent book into a bit of a confused mess.

Take this passage for example:

At provincial headquarters [in Morocco], the passport department was dealing with hajj matters. “You’re late professor!” shot a mustachioed civil servant in dark suit and red tie. He was seated, I was standing.

Nonplussed, I didn’t know how to reply.

At this point, you’re quite engaged. You feel for him as he stands at the mercy of some petty official in some windowless, numberless room somewhere. But having given him your undivided attention, look where he takes you:

Yet my memory told me I had some capacity to endure this – not enough, though, since memories of past facts are not the facts themselves. When the facts return, we are no longer in them; we’ve already been through them, and their unfolding and consequences are no longer unpredictable. Of course, they haunt us nonetheless, but at that point they are part of what we’re living through in the present. So my previous dealings with bureaucrats did little to protect me, especially since I had tried to ensure I never habituated myself to them.

Er… what? Facts “haunt us”? Facts return and we’re “no longer in them”? Despite re-reading such passages, I come away none the wiser. And I particularly detest authors waxing intelligent and introducing their thoughts with “of course” when there seems to be nothing “of course” about it. Drivel. Here’s another piece of tangential piffle:

All these [Islamic] prohibitions, which seemed to bear on things outside the self, in fact touched equally, if not more so, on the uses and representations of the body. Since I eat and drink and, in normal time, have a sex life, I secrete matter. These secretions cross the surface of my skin, their channels starting and ending mostly on my face. But because something has to reach the mouth, nose, ear, eye, skin, starting point for excitation, the very ideas of arrival and departure prove to be relative. In any case, the usage of the world is the usage of the body, and nothing escapes its coordinates. Thus by this progression, the entire universe gets mapped out, returning to the body the matters and forms appropriate to its usages.

With the major problem of the book being waves of incromphensibility, the fact that it’s not edited well just adds to the frustration. On one page I came across a lengthy paragraph repeated twice. Now, I’ve seen this in books before. What made this particularly noticeable though was that it was in fact two drafts of the same passage. Classic. Maybe it’s the start of a new A/B literary genre where the readership get to choose which version is finalised.

And that the entire experience was, for Hammoudi, confusing and contradictory is evident everywhere. He admits as much several times. There are conflicts between his nominal religious beliefs and the zealous forms of Wahhabi Islam he encounters in Saudi, conflicts between his ideas and that of his travelling companions and physical conflicts between pilgrims on several notable occasions.

There were further contradictions in the points Hammoudi was making as he went along. Early in the pilgrimage, he talks about how the western world has made a mistake in conceiving Islam as a militant religion. Then, later, he says “the others talked on and militated in favor of “bringing Islam back into our societies.”” A slip of the pen perhaps? Hmmm. Later, his statement that

There is no doubt that it was Islam that first called for communal solidarity in its acts of worship, and indeed explicitly enjoins believers to engage in it.

strikes me as a man who must be profoundly ignorant of both Christian and Hebrew traditions. You can barely read a chapter of the Torah without coming across a divine mandate to meet together in a corporate act of worship. And these writings predate Islam by thousands of years. I expect better from a professor, I really do. Even one at a US university.

Whether Hammoudi actually completes the pilgrimage seems uncertain. When it comes to sacrificing a lamb, the event, despite its build up, is glanced over very quickly. It turns out that he paid someone to make the sacrifice for him. Might as well pay someone to do the entire hajj for you, surely. And, amazingly I thought, instead of enduring the long return to Morocco with his fellow pilgrims, he makes a bolt for the airport in a taxi! This did leave me though with one important anthropological insight: you can take the Moroccan out of the US but you’ll have a hard time getting the US out of the Moroccan. 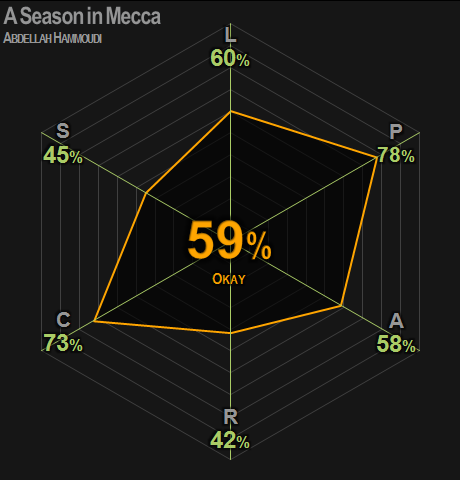 Context: Poor old Mrs Arukiyomi had to have 5 stitches in her finger while I was reading this. REVIEW Fiiiiinally read this. I say that because, when I was a…

Context: Me and Mrs Arkiyomi read this together a chapter at a time while we toured Europe inlcuding tea on this Aegean ferry. REVIEW My first Zadie Smith and it…

The Third Wedding is the story of  two Greek women and their lives from the 1920s through until the years following WW2. One is called Hecuba. The other, who narrates…

Context: Read this the lovely warm conservatory overlooking our friends’ garden in Flackwell Heath. REVIEW Benedict Allen would, these days, have his own TV series and have put a…